Women receive over half the bachelor’s degrees in biology nationwide—which bucks the trend of gender imbalance in STEM. But a University of Minnesota study into one particular introductory biology course asks questions over fair assessment of men and women in high stakes testing and lab work.

According to the study, women performed significantly less well than men in a selection of final exams. Meanwhile, women even more significantly outperformed men in “non-exam” assessments such as lab work, quizzes, and group projects.

The study concludes that efforts to “minimize threat during exams should reduce gender differences.” From this, the authors appear to suggest moving away from exams towards mixed assessment.

So what’s a college instructor to do? Replacing course finals with other modes of assessment may certainly be possible. As a tool for assessment, high stakes testing has its limitations. We’ve all known bright and knowledgeable students who just don’t do well at tests.

But the Minnesota study’s suggestion of removing exams is likely to tilt the playing field against male students, who after all did worse than women on all the non-exam assessments, regardless of prior academic preparation, level of anxiety, or interest.

Finding a way to reduce test anxiety for women in high stakes testing would be a course of action supported by the study. One reason cited is “stereotype threat“—a phenomenon where in this case, people underperformed on the test because they felt pressure to conform to other people’s impressions. A Stanford list on how to combat stereotype threat in college includes making clear that diversity is valued, removing any physical cues for stereotypes and creating a growth mindset in students.

But in the end, lack of academic preparation was twice as likely to result in lower grades, no matter your gender. Addressing pre-exam anxiety would make sure men and women all get a fair assessment, but working with students to carefully prepare for these kinds of high stakes tests would decisively raise achievement for all. 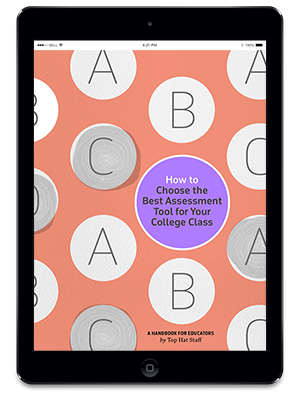 Get a comprehensive guide to today’s assessment technology, as well as tips on balancing formative and summative assessment.

Karen Quevillon earned a PhD in Philosophy from Northwestern University and lives in Hamilton, Ontario. She teaches writing, literature and liberal arts courses in-class and online at Ontario colleges. A published author of poetry and fiction, she has worked as a freelance writer for almost a decade.