How to Succeed at Course Transformation in a Big Class

There is a metaphor that postsecondary educators fall back upon when talking about a well-worn course: it’s like a house. Sometimes it needs a little fresh air, some new furniture in the form of think-pair-shares or other active learning exercises, to recapture students’ attention. Sometimes it needs to be stripped down to the studs and rebuilt from the ground up in order to get the kind of engagement students need to master the material.

But like all metaphors, the course-as-home-improvement-project is an imperfect fit. In this instance, one of its shortcomings is that it makes a complete course redesign seem like more work than it actually is. The walls and ceilings, being merely symbolic, are actually not that hard to knock down. And they offer a fresh perspective not only to students, but to faculty as well.

Just ask University of Pittsburgh lecturer Candice Damiani. She and her colleagues teach Foundations of Biology 1 and 2 in the Department of Biological Sciences, and they knew it was time for a teardown. “Our expectation is that once students have taken Foundations 1, they’ll arrive at Foundations 2 with the same basic knowledge and skill set,” Damiani explains. “The fact is, they’re not. So we had to find a way to change the series so that the learning takes hold early and stays with them through the series.”

Damiani told her story as part of a panel discussion titled “Big Change: Case Studies of Course Transformation” at Top Hat’s Engage 2018 conference in Chicago on October 26-27. And the redesigned house, as Damiani explained to a gathering of some 200 faculty members in attendance, was built surprisingly quickly. “We took a one-day break in the fall and mapped out all the content we cover, but we categorized that content based upon the quantitative skills that students need to learn.” Those skills fell into five basic categories, including population genetics, DNA replication and species diversity.

The content didn’t change much as a result, but the focus on skills brought a fresh perspective on the connections within the material. It also helped establish a common vision among all the faculty involved in teaching both courses. That’s not to say there wasn’t any heavy lifting: Damiani told the audience she had to analyze everything she was presenting and ask why she was teaching the material, and whether or not it truly benefited skills development.

“But once the upfront work is done, it’s done,” she says. “We don’t focus on content anymore. We create skills.” Damiani and her colleagues are already starting to see improvement from students in Foundations 2 as a result.

Damiani’s co-presenters, University of Connecticut professors John Redden and Kris Kimball, confronted a similar problem with the introductory physiology courses they teach, and which—like Damiani’s courses at Pitt—are an early staple for a variety of UConn programs. “We had to swallow a very bitter pill, which was that learning was never actually taking place inside the classroom,” says Redden. “We were giving them information, good information, but the real learning was happening elsewhere.”

Kimball agreed. “The easiest thing for me to do is to lecture, especially when there’s lots of material to get through. But things like central nervous system anatomy are really hard, and the students breakout activities and other opportunities to engage with the material.”

In their case, however, the walls weren’t merely symbolic: both Redden and Kimball were teaching in large, theatre-style lecture halls that discourage group work. “Once students are in that seating arrangement they expect a passive experience, and you have to actively fight against that expectation,” says Redden. “I’d yell ‘Up! Out of your chairs!’ and have them sit on the floor. I’d have flipcharts taped to the wall and have students moving around. Anything to change things up.” 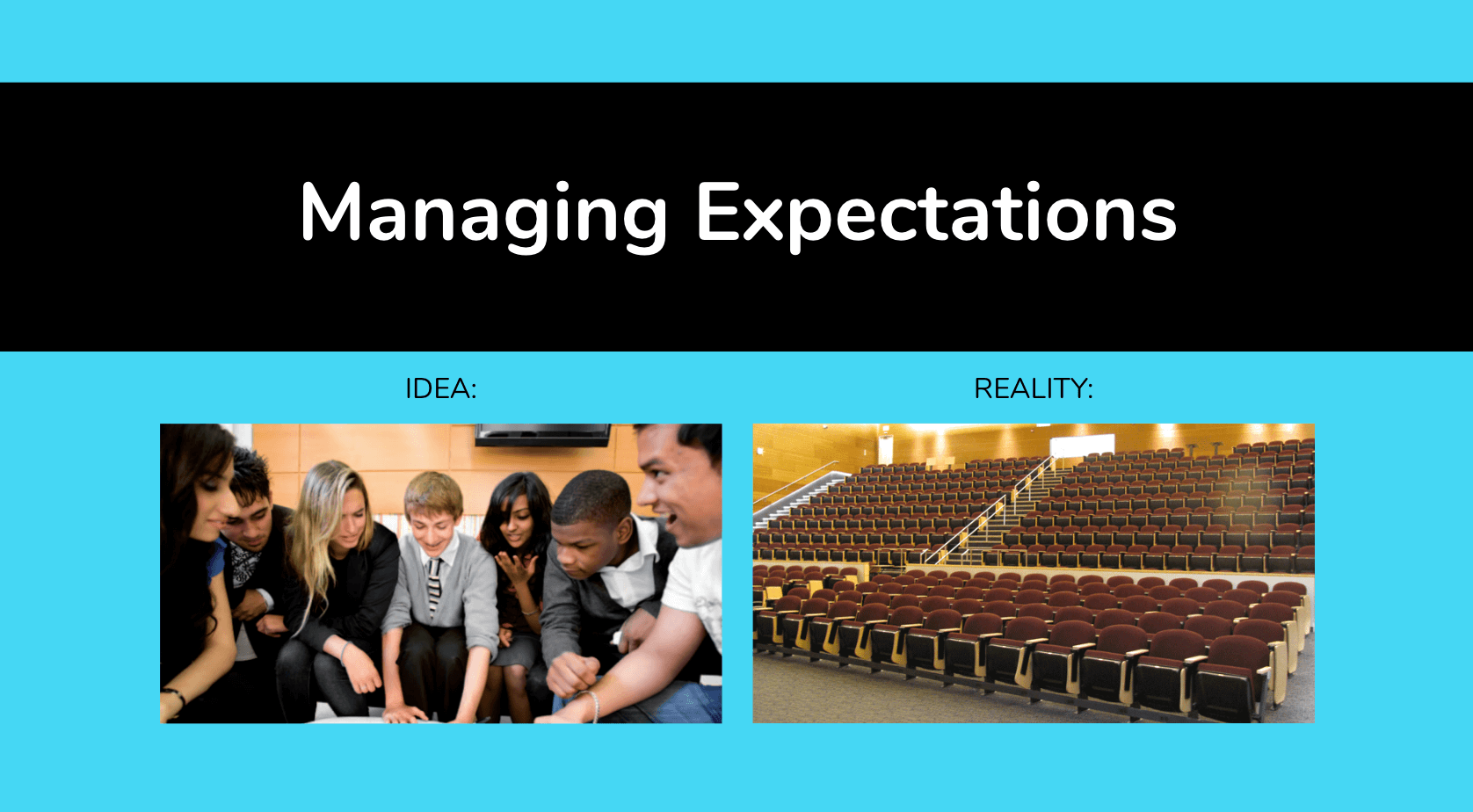 They’ve since restructured their course to include lots of breakout activities led by former students of the class. They’ve also changed physical location, from a couple of lecture theatres to five different classrooms with tables and moveable furniture, with some sessions running concurrently.

As a result, they’ve found that their own role has changed as well: they’ve gone from being instructors to being facilitators and trainers, often shuttling from one room to the next. Redden jokingly tells his students that he is their “physiology spirit animal.” But the change has worked. “Students don’t care if they learn from us or from the students who run their breakout sessions,” says Redden. “They are simply happy to learn from others.” Nearly all students have found their new approach to be more interesting and more helpful to their learning.

And while student success is always a driving motivation behind large-scale course transformations, the change can also be a tremendous boost for faculty. If a course is indeed like a house, students are just semester-long guests. It’s faculty who have to live there year after year after year. When they choose to rebuild by transforming their courses, they stand to benefit at least as much as their students do, if not more. And on the flipside, faculty stand to suffer most from a lack of attention to its state of repair.

Great panel – I am super impressed by how these professors have transformed their large classes using @tophat pic.twitter.com/yIWXw6ABE8

This particular realization hit Greg Domski, a professor of chemistry at Augustana College in Rock Island, IL, shortly after the received the news that he’d been tenured—which, in his case, arrived at the tender age of 32—and it precipitated an existential crisis. “I started to wonder, ‘How am I going to stay fresh and excited and get out of bed every morning for the next 35 years?’”

The question was compounded by the fact that his “house”—general and organic chemistry courses for freshmen and sophomores—doesn’t lend itself well to redesign. “The information is largely canonical, set in stone,” he says. Domski decided that, if he was going to live in these classrooms for three decades or more, he’d design them based on what he liked most. “What I enjoy is when students come into my office and we talk, or the evening help sessions with small groups, when I can see the mistakes they’re making and push them a little bit.”

“The benefit of having a PhD-level chemist in the room is not to talk at you, it’s to help you solve the problems and learn the material in a deep way.”

Domski ended up flipping his classroom, recording his lectures, supplementing them with his slide presentations, and assigning them as student homework. The change freed him and his students up to spend class time doing active problem-solving and group work. Today he wanders the room and helps students grapple with the day’s material; if he notices that a particular misconception is common, he’ll pause proceedings to lecture about it. It’s made him a happier professor, precisely because he feels he’s forging stronger relationships with students. “The benefit of having a PhD-level chemist in the room is not to talk at you,” he says. “It’s to help you solve the problems and help you learn the material in a deep way. That’s how I spend my class time now.”

One of the unintended consequences of the change has been fewer visits during office hours and fewer students attending help sessions, which Domski takes as a sign of success. “In the past, their own questions wouldn’t occur to them until they were doing homework in their dorm room. Now they ask questions in class because they have to solve the problem in class.” It’s especially helpful, he says, for students who have family or work responsibilities on top of their studies, and who can’t always find the extra time. “The learning happens in class now. It’s much more efficient for me and for them.”