Calhoun College — one of Yale University’s residential colleges — has been renamed to Grace Hopper College. John Calhoun was a white supremacist who defended slavery; Hopper was a pioneer in computer science, who helped to invent the compiler and COBOL (and even the word ‘bug’) at a time when few women had access to the male-dominated world of math and physics.

The renaming gives her some of the recognition she deserves as one of the first-ever computer programmers.

Hopper was a mathematician, computer scientist and rear admiral in the U.S. Navy. Born in 1906, she studied math and physics at Vassar and then Yale, earning a PhD in mathematics in 1931. She taught math at Vassar for the following decade before joining the U.S. Navy, as part of an all-female division put together in 1942 during the Second World War, where she helped program the new Mark I computer at Harvard. After that, she was hooked on computing.

Hopper led the team that developed the first working code compiler (the A-0 system), which led to the creation of COBOL—one of the most important programming languages of the 20th century.

Perhaps most importantly, she believed that programming languages should be as easy to understand as the English language—hence, her work on the compiler, which transformed source code from high-level computer language that could be written by a human into a low-level language that a computer could process. But, back in the day, that view wasn’t exactly popular among her peers.

“It was clear to Hopper that programmers regarded themselves as ‘high priests,’ jealously guarding their status as intermediaries between ordinary people and the occult computer brain. They felt that her compiler was a threat to their status,” according to an article in The Vindicated.

But she persisted. FLOW-MATIC, an English-language-based computer language, became the base of COBOL (which stands for COmmon Business-Oriented Language). Ironically, Hopper received the ‘Man of the Year’ award in 1969 from the Data Processing Management Association.

Hopper also coined the word ‘bug.’ In the 1940s, her team was working on a computer glitch, only to discover the problem was a bug—a live bug, that is: a moth stuck in an electrical switch. Hence, they ‘debugged’ the first computer.

These days, children are learning basic coding skills in elementary school, in large part because of Hopper’s work and persistence. It was her belief that coding should be easy for anyone, not just highly trained mathematicians. So it’s fitting that a college bear her name.

“A ship in port is safe, but that is not what ships are built for,” Hopper said in 1981. And Hopper certainly never took the easy path in life.

Related story
Why computer science is foundational for every student 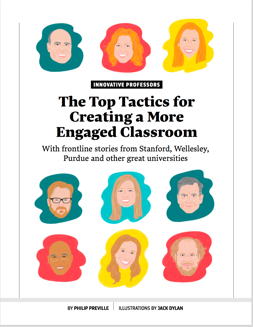 Learn how leading professors from Purdue, Stanford and more use gamification and role-playing to ramp up engagement in their classrooms in our free guide, The Top Tactics for Creating a More Engaged Classroom ❯ ❯ ❯

Vawn Himmelsbach is a journalist based in Toronto.