Do you shudder every time you walk into your campus bookstore? Have you ever forgone buying a required textbook because it was simply too expensive? For many academics, good education has become scarcely affordable. With the cost of higher-education reaching new heights and student debt increasing more than ever before, maybe it’s time we stop and ask how we can stop higher education from posing such a monumental financial burden on the its patrons, past and future.

They sit on my bookcase, arranged according to height—monuments of the hundreds of dollars spent on paperbacks, of the late nights passed by riffling through chapters before an exam, covers and pages stained by the familiar ring of a mug filled with one too many lattes. Maybe I’m just a bookworm clinging to her past, or perhaps I couldn’t bear the thought of selling them back to the bookstore for a fraction of the price that I was required to pay for them just a few semesters prior. In any case, I’m only a little embarrassed to admit that I have held on to every single textbook that I ever purchased throughout my entire university career. Every, single, one; even those that I swore I’d never crack open again.

As a student I knew (in a very real, surviving on PB+J sandwiches kind of way) that textbooks were a huge and expensive part of my education.  It wasn’t until I started investigating trends in textbook pricing that I uncovered the alarming rate at which they have been increasing. According to the Huffington Post, the inflation of post-secondary textbook pricing has surpassed that of the housing market, the cost of health care, and even college and university tuition . In another article published by NBC, the cost of textbooks has increased a nauseating 1,041% since 1977. Excuse me, but 1,041%? How is this happening?

It seems as though the academic publishing industry has been able to steadily increase textbook pricing through a few vehicles.

It’s not all bad news. Read our free white paper, the Death of Textbook Publishing and the Future of College Course Content.

If you’ve been a student in the past decade, you might feel the sting of the words “New Edition”. “New Edition”, is code for small changes or small additions that add up to some big coin. What it means is that previous editions of the text, which may be much less expensive, become obsolete and difficult to find. This is because textbooks have a shelf-life of about 3.5 years before publishers update them and release a “New and Improved” version. What’s more, is that even faculty find these New Editions an unnecessary strain on student wallets. In 2004, the Student Public Research Group conducted a study, reporting that half of the professors surveyed stated that the New Editions of textbooks were “rarely to never justified”

2 years ago, when my beloved 1991 Plymoth breeze finally crapped out on me for the last time, I begrudgingly had to find a new car to get me to work 5 days a week. I had to express repeatedly to the salesmen, that I ONLY wanted a base model; no bells or whistles, just a car with an engine that wasn’t a total death trap. Did you know for an extra $8.30 a month, my base model could come with heated seats? Canadian winters often stretch into April and May, so I’ll leave the rest to your imagination. But here’s the thing, when it comes to fancy packages and add on’s, on most products we buy, we have a choice and some say in the matter. But when it comes to textbooks, often times students are paying for supplementary features that they’ll never use and don’t really need. According to the Student PRIG, nearly half of textbooks now come “bundled”, meaning that the text is packaged up along with work books and CDROMs. These supplementary items allow publishing companies to charge 50% more for the text as opposed to the unbundled version.

3. Monopoly (not the board game)

Unfortunately, the rising costs of textbooks is largely due to the fact that a handful of publishers have a monopolization of the education market. Small indie publishing companies are undervalued because they often publish course material that are so specialized and unique, and while this is in itself amazing, makes the buyback potential much lower. Major publishing companies maintain the contracts for the texts that are in the highest demand and according to the Huffington Post, are able to drive up the price of books four times that of inflation.

The average amount that students will spend on textbooks and materials in 2016 is around $1,300, and some spilling far beyond that mean.  Couple this with the insanity that is the rising cost of tuition and how can we possibly expect students to pay for their education without emerging with crippling debt? In a survey that took place across 13 American college campuses, the U.S Public Interest Research Group found that 7 out of 10 undergrads chose not to purchase one or more required textbooks because of the cost. As a student and teaching assistant, I’ve seen the ramifications of this reality many times. These often exorbitant prices come with a much different cost. Should how well we do in a class really be effected by the depths of our wallets?

Luckily, there seems to be a glimmering light at the end of this very expensive tunnel and the rise of the textbook hike might soon be coming to a close. With the growing popularity of things like the open-source textbooks, and textbook renting platforms, we may soon see the end of the rein of the ever-growing price tags. It’s clear that there’s more work to be done to help alleviate the rising cost of education for students. Figuring out how to make the price of textbooks a little less scary is just the tip of the iceberg. 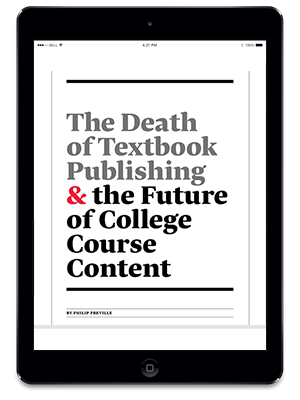 A change is coming—despite astronomical pricing, the business model for print textbooks is no longer viable. Get our free white paper to learn what will replace it.

Monika Semma is a writer who has recently finished an M.A in cultural studies and critical theory at McMaster University, Ontario.