Why It’s Important to Approach Teaching With a Growth Mindset

Buckle up if the following ideas resonate with you: Lecturing seems to come easy to some professors. They are able to connect with their students effortlessly, and benefit from an enviable sense of engagement as a result. Likewise, some faculty are naturally adept with technology, while others struggle to integrate it into their classrooms. Some make the transition to active learning look easy while others spend months trying to revamp their curriculum. When universities hand out their annual teaching awards, they seem predestined to go to a small subset of naturally gifted communicators.

If the description above rings true in your mind, then you may have subconsciously fallen victim to what Stanford psychology professor Carol Dweck calls a “fixed mindset”—the belief that attributes such as intelligence and skill are static, and that little can be done to overcome your shortcomings. Dweck contrasts that perspective with what she calls a “growth mindset,” or the belief that intelligence and skill can be developed through practice and dogged hard work.

Dweck’s “growth mindset” research was the starting point for a panel discussion at the Engage 2018 conference hosted by Top Hat in Chicago on October 26-27. And the panelists, speaking to a gathering of several hundred faculty members from across North America, agreed on one central point: if you want to become a better educator, the first step is to embrace a growth mindset. “The thing is, we implicitly expect our students to display a growth mindset,” explained University of Saskatchewan assistant professor Kyle Anderson, the school’s undergraduate chair of biochemistry. “We expect them to believe that if they work hard and apply themselves they’ll be able to learn and develop. But we don’t always apply that same thinking to ourselves.”

Dweck’s research has shown that a growth mindset brings many advantages. People who display a growth mindset—the belief that intelligence can be developed—are less likely to avoid challenges or give up in the face of obstacles, and more likely to work hard towards goals and accept criticism constructively.

Meanwhile, one of the compounding challenges of a fixed mindset is that they are cultural as well as individual, making it a shared and self-reinforcing trait. “North Americans have a fixed mindset about math, for example,” explains Laura Freberg, a professor of psychology at California Polytechnic State University. “You hear people say, ‘I’m good at math’ or ‘I’m bad at math,’ as if it’s a state they can’t change. We reinforce the idea that math is hard. People from east Asian cultures don’t have that at all with math.” Cultures can also affirm fixed mindsets more forcefully within their own subgroupings, such as gender—witness the talking Barbie doll from the early 1990s whose recorded utterances included the phrase, “math class is tough!”

Growth mindset research is on the rise among scholars of teaching and learning because of its perceived ability to impact student engagement and outcomes—and to help equalize cultural discrepancies in education. In one research study, published earlier this year, some 7,600 incoming freshmen at a large Midwestern university were randomly assigned an online growth mindset intervention at the outset of the school year. The results showed that Latino and Latina students’ GPAs improved by 0.4 points, representing a 72 percent reduction in the GPA gap between Latino and white students.

There is little, if no, research to date on fixed and growth mindsets among faculty members. But Anderson, who also mentors colleagues on active learning and classroom response systems, says the fixed mindset among faculty is often focused on classroom technology, and what he calls the educational technology skills gap. 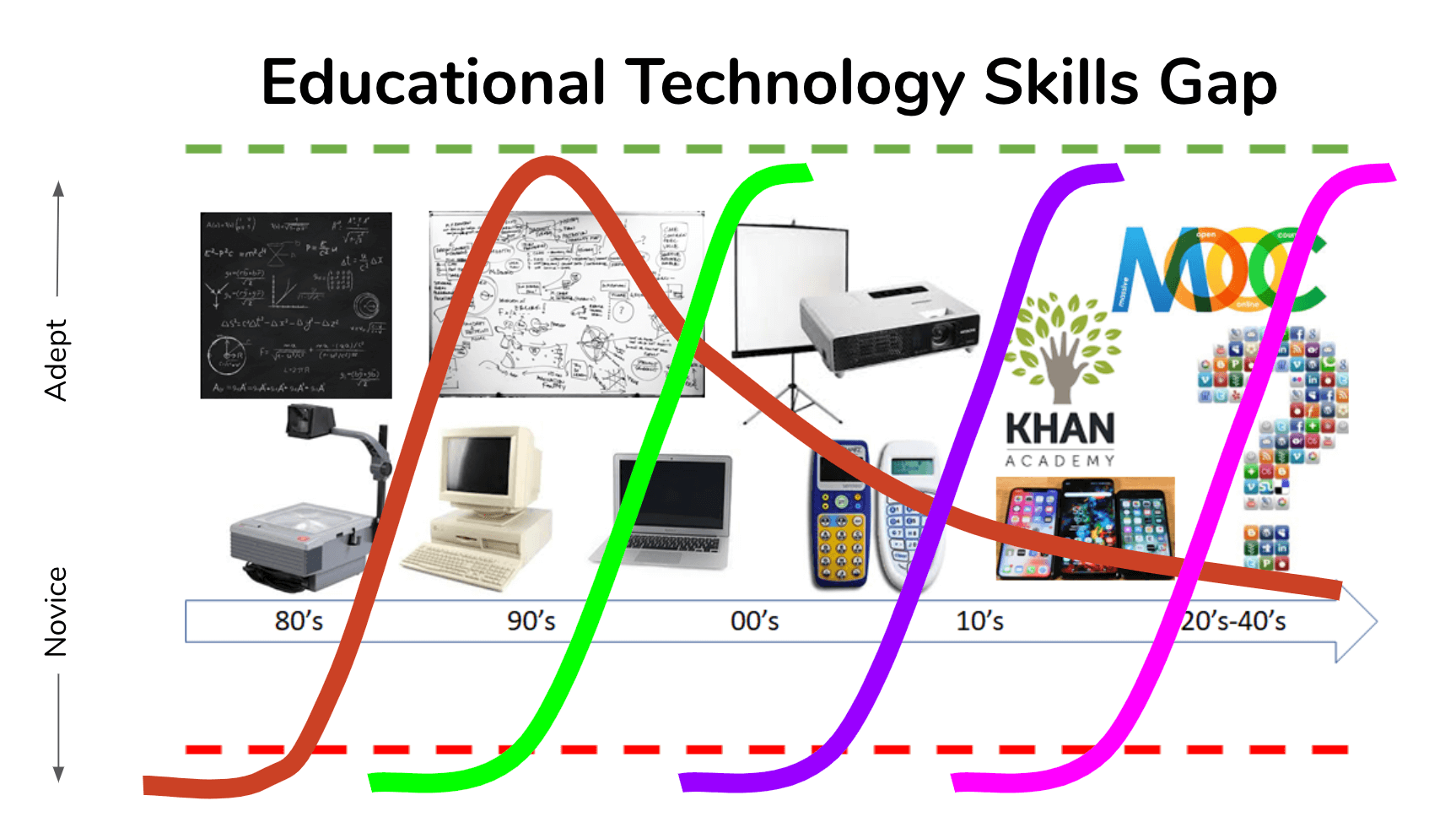 The skill gap for educational technology changes depending on the decade. Source: Kyle Anderson

“Our proficiency with technology tends to peak at a certain point in our own learning,” Anderson says. That moment typically comes during graduate school: students master the research and classroom technologies that are most advanced and most common at that time—but then fail to keep up with technological advances. For instance, a professor who completed graduate school in the 1990s would be highly proficient with computers, PowerPoint presentations, and e-mail communication with students. But if that professor doesn’t keep up with changing educational technology—clickers and classroom response, online resources, social media—then a skills gap develops.

There’s nothing unusual about a skills gap. But in Anderson’s experience, a professor’s willingness to bridge the gap often depends upon the mindset they bring to it. “And because technology keeps changing, the gap grows over time, making it more challenging to keep up,” Anderson says.

“We are not trained to teach”

Freberg says faculty “need to listen for the fixed mindset voice in their heads” that tells them they can’t do something or overcome an obstacle. “When you are able to hear that voice, you can try to adjust your thinking.”

“Part of the challenge is that, as professors, we are not trained to teach,” said Tamara Small, an associate professor of political science at the University of Guelph who attended the session. “We are subject matter experts who are expected to take on that role. I know I was a really good student, but I struggle with a growth mindset in my teaching.” Small says her department is using the Top Hat platform for all its second year classes, but admits that “we are using it mostly in rudimentary ways. We do the things that are easiest, like asking multiple-choice questions. So I am interested in expanding the way we use it.”

Kristen Kimball, a lecturer in physiology and neurobiology at the University of Connecticut who also presented at the session, pointed to her own experience teaching in large lecture halls for more than 30 years, advancing from overhead projectors to classroom engagement platforms such as Top Hat. Kimball asked the audience of instructors what their greatest concern about trying new technology or pedagogies might be. Their answers, which were displayed onscreen—and which included such considerations as the time required to learn, cost, the lack of technical support, adverse reactions from students and colleagues, and negative impacts upon tenure-track advancement—read like a cultural mind-map of academics’ closed-mindset voice.

In the 80s, Kristen Kimball used to teach in a 470 seat recital hall(no desk!)—and PowerPoint was a big advance. We're now at stadium seating and LMSs, but has the classroom really "evolved"? #engage2018 pic.twitter.com/DJ2G24W0v4

“My point is that, if I can do it, you can do it,” Kimball said. Taking time to master new technology and apply it in the classroom conflicts with many professors’ concern with “getting through the material,” Kimball says. But once the technology has been mastered, it facilitates rather than hinders that task. Freberg, for her part, agrees. “When you have a growth mindset, you’ll have more persistence in the face of difficulties.”

Freberg’s advice to faculty trying to step out of their fixed mindset with educational technology: “Don’t try to make all the changes at once. Just choose one thing you want to try, and commit to it so that you give yourself the chance to get better at it.”