Big Data is the Secret to Student Success in Higher Ed

Dr. Mark Milliron, Co-Founder and Chief Learning Officer at Civitas, draws on his own experience as a student, using data to give a leg up to those who wouldn't have otherwise finished higher education

Dr. Mark Milliron is the Co-Founder & Chief Learning Officer at Civitas Learning, a data analytics software provider and consultancy that works closely with educational institutions to improve student outcomes. And although he became an award-winning instructor before heading into university administration, philanthropy, and the association worlds, Milliron almost never went into higher ed himself. Here, he talks about how the concept of post-secondary education has evolved to embrace non-traditional students like himself, and how the inspiration he takes from martial arts and data science helps him give back to the educational community that lifted him up.

I come from a pretty rowdy, large family of nine kids—I have an African American brother, Native American brother, Korean sister and, in addition to that, we had about 25 foster kids that rotated through my house during the time I was growing up.

There was no expectation of going into higher education—it was pretty much understood that we couldn’t afford it. But throughout high school, I started to think about the college track, even though I didn’t know what that meant.

I’d shown some promise and some teachers had taken an interest in me. But my parents literally didn’t want to sign the permission forms for me to take accelerated courses. Luckily, being in such a big family, I was able to hide—I forged their signatures and took the classes anyway. I don’t begrudge my parents at all, I totally understand with the background they’re from. They were trying to protect me from disappointment. 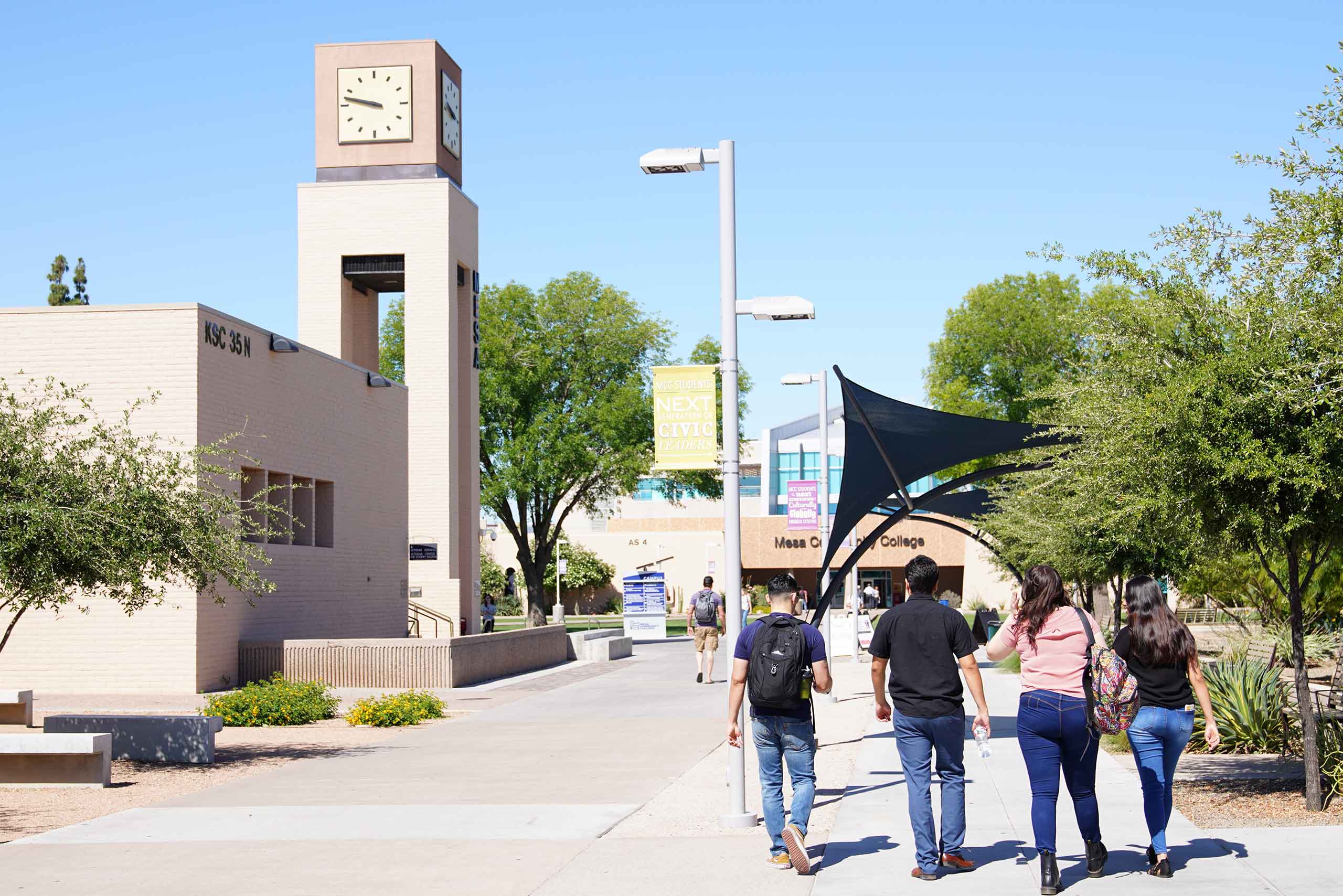 I wouldn’t be sitting here today if it wasn’t for community colleges. There was a community college near where I grew up in Arizona, Mesa Community College, which was my pathway to possibility. I paid my way through Mesa by busing and waiting tables—and that got me ready for the road ahead.

Jim Mancuso, a faculty member at Mesa Community College, was one of the first teachers to get to know me and also challenge me. You’ve heard the classic expression, “They don’t care what you know until they know that you care?” Well, once we’d developed a little trust, Mancuso challenged me pretty hard. I was still getting As and Bs in all my classes, but he got in my grill and just said: “Mark, I know you’re not trying as hard as you could try. And you can fool everyone else, but you are gonna be dangerous when you finally decide to try.”

It’s funny, because when it first happened, I was a little put off, but then I meditated on it, and then I realized: “Oh, he was exactly right.” He called me out at the right time. Because he had taken the time to get to know me and because of our relationship, I took it the right way. That was really important to my development—a moment when someone kind of challenged me to go to the next level.

I transferred from Mesa to Arizona State University and got my undergrad. I also realized I had opportunities to get some support. I knew nothing about the bureaucracy of higher education whatsoever, but mentors showed up to help me out. They also figured out I was academically strong enough to become an Arizona Regents Scholar. So, suddenly I’m a scholarship student, but even then, I was deep, deep into the impostor syndrome.

I came from the lower middle-class (at best)—we had no money. I didn’t really understand how higher education was supposed to work academically or socially. And I figured sooner or later, someone was gonna figure out I was not supposed to be there. But in my Master’s program, I fell in love with teaching. In my undergrad, I’d done some teaching assistant work with some inspiring instructors, but in my Master’s program I got to teach, and I actually won an award as a graduate student instructor.

Once I was able to overcome some challenges, I realized I owed somebody else behind me. I’ll tell you where that came from—not traditional higher ed, but martial arts. Somewhere between 18-to-19 years old, thanks to Jim Mancuso and others, I fell in love with learning, and I challenged myself to learn new things. So, the two things I learned outside of my traditional pathways were, I started taking piano lessons, and I started doing martial arts.

I had this amazing sensei named Ray Fisher, who headed the Arizona Ch’uan Fa Society. The traditional martial arts has what I call the “three-peer strategy.” You always try and have three peers in your life, one peer is somebody who’s ahead of you, who can inspire and challenge you. Then you have peers at your level, that you’re going through with a shared experience at the same time. But then at some point, you gotta turn that over, and you gotta become the mentor for somebody else. The third level is to give back.

I took that to heart, and I kind of transferred that to my education. How can I give back? How can I help people, especially like myself, with non-traditional backgrounds?

I want all students to be successful. But I have a particular penchant for non-traditional students. Teaching was my first way to do that, to be an inspirational instructor like the ones I’d had. And from there, I wanted to help, with everything from assisting students themselves to creating some colleges and universities that are actually inspirational and supportive of non-traditional students.

We’re living through a really interesting time. Our economy has shifted into the information age, where we’re not making things so much as creating things—a different kind of concept. It’s been hard for high schools and higher ed to reorient themselves.

The hard truth is, in the 1950s, 60s and 70s, we didn’t need most people to achieve a post-secondary credential with labor market value for them to live full lives, be economically viable and have choices. You just didn’t have to. We did a ton of work to open up pathways to higher education, and everybody was trying to figure out all kinds of access opportunities to get people in. But, we really didn’t need all of them to succeed, we only needed a certain percentage. Suddenly, when you started getting into the 80s, 90s and 2000s, the economy is shifting and we suddenly need more and more people with credentials.

Colleges and universities used to be a pretty tight club: economically segregated from society as a whole. But now, you’re broadening out to a bigger set of people. I’m not surprised lots of change is happening. But we’ve conflated quality with traditional models, without realizing that there are other ways to get to the same quality.

The combination of different students, different economic needs and different tools, technology and data actually gives us an opportunity. I think we’re about to enter a golden age of learning.

The need has never been higher, for individuals and society, for learning to be effective. But we’ve never before had the technology, techniques and data to test it. You can say, “Wow, we can really run a bunch of experiments to figure out what works and for whom,” and we can learn about how to make learning world-class for new people—especially through a diverse, inclusive lens.

Civitas’ vision statement is, “Make the most of the world’s learning data.” But how do we actually get that back to the teachers, advisors and administrators, so we can tune the learning mix to get to the best outcome for the most people?

We studied four million students from nearly 70 institutions, to look at student journeys and see if we can find why they leave their courses early. One of the things we found out was that 98 percent of the institutions were losing more students at above a 2.0 GPA than below. Which means, academically they were doing okay. In fact, 76 percent of the students who left were above 2.0.

Responding to this, the institutions started innovating around academics: let’s fix this course, let’s require more math, let’s raise the SATS cut score. But then we went deeper—and this is the thing that really kind of blew people’s hair back—we found between 40 and 48 percent of students who dropped out had a GPA of between 3.0 and 4.0. So, academics were not necessarily the issue: there were other things going on. For some, it’s life, logistics, and psychosocial. So, it’s affordability, housing insecurity, food insecurity, textbook cost.

When people started innovating against those obstacles, that’s where it got interesting. There are big programs like the Hope Center’s work with Dr. Sara Goldrick-Rab, all the way down to ‘nudge’ programs at the campus level. Here’s a concrete example: one of our colleges, Lone Star College, identified in the predictive models the students who were above a 3.0 GPA with a high likelihood of leaving, and they basically just sent them an email with the subject line: “We’re proud of you.” In the body of this email it said: “Congratulations, you’ve done so well here. We’re looking forward to helping support your continued success.”

We know that college is hard. And often students have troubles with transportation, food, housing and a whole bunch of other issues. So, the email also said: “Please know this is normal, and if you’re experiencing any of these issues, make sure to reach out and see if we can help. And again, congratulations on your great work, let us know if we can help you on the road ahead.”

That email? Massive response. The students almost immediately reached out. We found out they had childcare problems, financial problems, transportation issues…but a number of them just needed to talk to somebody about whether or not they belonged there. That’s where this statistical science comes in, where we suddenly can ask and discover various challenges and then innovate against them.

I’m blessed to be a part of a community of like-minded people. We’re at a time when we can probably make more of a difference than ever before. But, we need to be tough-minded enough to look at the data and innovate around what the challenges are. Especially with non-traditional students.