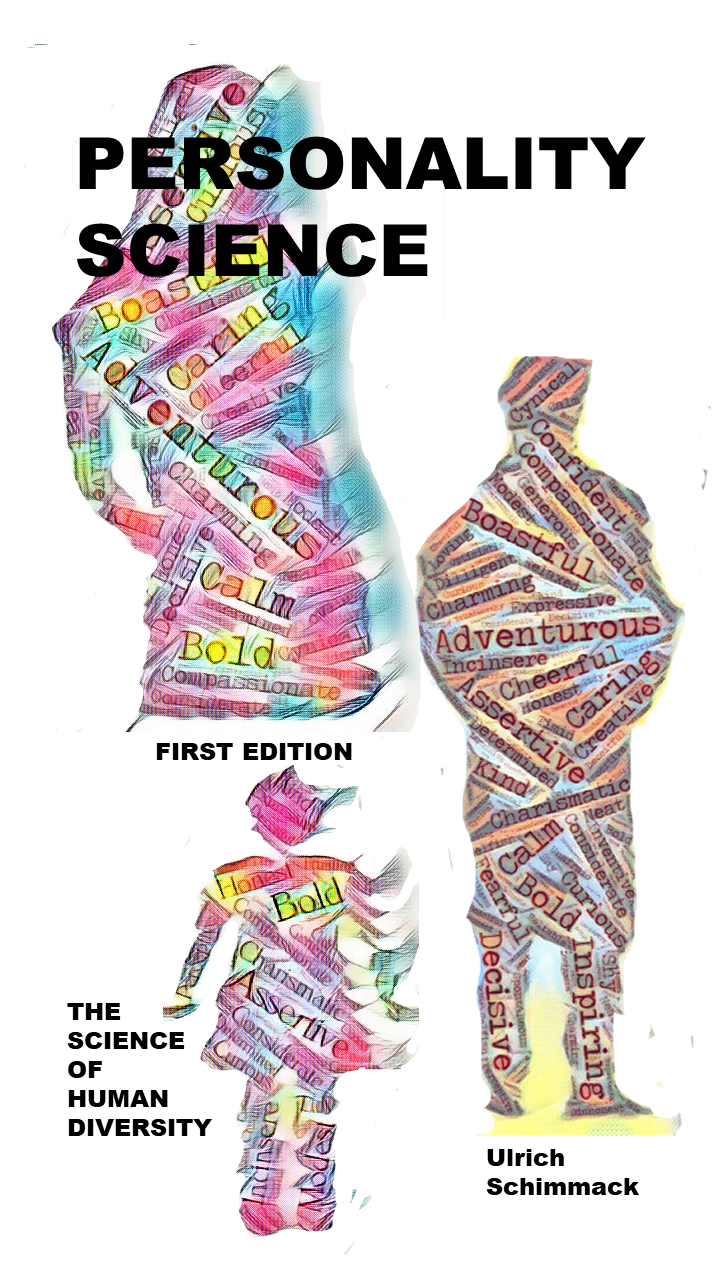 This book provides a modern and up-to-date introduction to personality psychology. The first six chapters introduce basic research methods, measurement, structure, stability and predictive validity of behaviour. The next four chapters examine causes of human diversity from evolutionary, biological, environmental, and cultural perspectives. The last chapter complements the trait perspective with a a focus on motives and values. Additional chapters are planned for 2021.

Science is supposed to be objective. This means that given the same information, everybody would arrive at the same conclusion. Furthermore, objectivity implies that only information that is well-established and generally accepted should be used to draw scientific conclusions. Mathematics is probably the only science that comes close to this ideal image of science. All empirical sciences are likely to be influenced to some extent by scientists’ personal views. This is especially true for the social sciences. It is impossible for humans to fully ignore their personal views when they conduct research, interpret research results, or write textbooks.

This book gives an introduction to fundamental questions about human nature such as (a) how much people are alike or different from each other, (b) how much human behavior is influenced by the situation (conformity, social norms) or their personality (values, dispositions), (c) how much personality is shaped by nature (inherited genes) or nurture (culture, socialization, parenting). Surveys show that people have different beliefs about these issues. This is also true of psychologists. Psychologists who study personality from a biological perspective focus on genes as causes of behavior. Developmental psychologists focus on parenting and socialization as explanations of human behavior. Social psychologists focus on the situation as an explanation of behavior. The specialization on one aspect of human behavior inevitably leads to some biases and can create controversies between researchers who study human behaviour from different perspectives. So, you may want to know a bit about me, the scientist who wrote your textbook, because my personality is likely to have influenced what you read in this textbook.

I was born in 1966 and grew up in a small town in Northern Germany. Being born in 1966, I was too young to experience the student revolutions of the 1960s, but was clearly affected by the changes that had taken place in many Western nations that are nowadays an essential part of modern Western cultures. I also grew up in a well-off middle class family. I was always good in math and interested in social issues. After I found out that psychology is actually a real science that does not just rely on subjective interpretation of dreams, I decided to study psychology. Being a curious person, I also wanted to move to a bigger city. In 1988, I started studying psychology in West Berlin, before the wall came down in 1989, which was a major historic event in my life.

I first became interested in emotion research and started to work with Professor Rainer Reisenzein. I also started to work with Professor Hubert Feger, who had a keen interest in psychological measurement and human behavior in small groups. Although I took introductory courses on personality psychology, I did not like personality psychology at that time for two reasons. First, a large part of personality psychology consisted of grand theories of human behavior that were often not grounded in empirical research. Freud’s theory is an example. As a student who got interested in psychology as an empirical science, I didn’t find these theories very useful. It didn’t help that most psychologists thought that these theories are outdated. The second reason was that I did not like the focus on genetic and biological influences on behavior. It did not help that theories of genetic influences on behavior were associated with Nazi Germany and eugenics. It was only later that I discovered the importance of personality research for the understanding of human diversity and realized that inborn genetic differences are not a problem, if we do not impose values on some variations and devalue others. This modern perspective heavily influences this book. The aim is to describe and understand differences without judgment. Politically this is a liberal point of view, but it is also the viewpoint of science. Judgment and evaluations are not part of science.

Every 4 years, the Olympics remind us of unique human capabilities. Even with a lot of training, nobody could match Usain Bolt’s exceptional performance in sprint or Michael Phelps performance in swimming. These are just two exceptional examples of human diversity. Moreover, Usain Bolt would never win a gold medal in gymnastics and Michael Phelps would probably not win a medal in tennis or basketball. Even unique talents are limited to a specific domain. Nobody is the best in everything.

In 1996, I was working on my dissertation on frequency judgments of emotions (how do you know how happy you were in the past month, and how accurate is your judgment?). I received a scholarship to work with Ed Diener at the University of Illinois, in the United States. Working with Ed Diener and his graduate students was a wonderful experience. After defending my dissertation in 1997, I was fortunate enough to receive a 2-year scholarship from the German Science Foundation (DFG) to continue my work with Ed Diener. My work shifted from basic emotion research to studying emotions from a personality perspective. The main question was why some people experience more positive and fewer negative emotions than others. That is, why do some people manage to be happier than others? This question has remained the main topic of my research, aside from a keen interest in research methods and practices. My passion for research is reflected in this book. A textbook written by an active researcher has advantages and disadvantages. The advantage is that I am in a better position than specialized textbook writers to critically examine research articles. I even added some of my own analyses to this book. The disadvantage is that textbook writers are good at writing textbooks. Compared to other textbooks, this textbook has a strong research focus. There is a reason why I put Science in the title of this book. This book does not just tell you about scientific findings. It teaches you how personality science works and to think critically about the research findings that have been produced.

After my post-doctoral education, I was fortunate enough to get a job at the University of Toronto Mississauga in 2000. I was promoted to Associate Professor in 2005 and Full Professor in 2011. I have published over 80 research articles in scientific journals and many of these articles examine what makes some people happier than others. When I tell people about my research on of the first responses is often that happiness is subjective and impossible to measure. I believe that the measurement of happiness is difficult, but not impossible, and some of my articles examine this important question. The measurement of personality is also not easy. In this textbook, I explain how personality psychologists validate their measures and how personality psychologists can detect and correct measurement error. Without valid measures of personality, this book would not be able to tell you anything scientific about personality. Fortunately, it is possible to measure individuals' personality reasonably well and this book provides some scientific answers to fundamental questions about personality. For example, Chapter 8 examines the question how much parents' genes and how much parenting influence personality.

In my second year as assistant professor, I was asked to teach the “Introduction to Personality Psychology” course. At that point, I did not have an identity as a personality psychologist. I saw myself as an emotion and well-being (happiness) researcher who studied emotions from a variety of perspectives. I faced two challenges. First, I was not really an expert on many areas of personality psychology. Second, I didn’t want to teach old theories that were already old when I learned about personality psychology. I wanted to teach personality psychology as a science that relies on empirical research just like all other areas of psychology are being taught. It was difficult to find textbooks that used this approach. Most textbooks felt obligated to cover at least some of these older theories and treat them as if they were important, although these theories no longer played a role in the scientific journals that publish personality research. I did not understand why I should teach a new generation of students something that seemed outdated. As a result, I developed my own lectures. I still assigned a textbook because my lecture notes were very sparse. I also started to write notes for my students because my lectures often covered new material that was not covered in textbooks. Over time, my lecture notes expended and covered more and more material and it became less and less important to assign an additional textbook. However, my notes were still not at the level of a commercial textbook. In 2020, I was approached by TopHat to create an electronic textbook that integrates experiential components, learning modules, and allowed me to embed videos. I liked the modern concept of teaching and thought it would be the ideal platform to teach personality psychology from a modern perspective.

Another development has been the ease with which information has become available. In 1988 when I started to study psychology, I spend a lot of money buying books and a lot of time and money copying articles to read at home. If I needed some information, but I didn’t have the article or book, I spent many hours traveling to various libraries in Berlin to get material that was only available in one location. Nowadays, getting information is no longer a problem. You just “Google” a topic and find free information about pretty much anything you want. Most of the information contained in this textbook can be found with Google searches. Today the problem is no longer to find information. The new problems are to find trustworthy information and to make sense of this information. This is the main contribution of this textbook. I focus on well-established scientific findings. I also organize the vast amount of information that is available in a meaningful and systematic manner (I am German after all). However, personality psychology is such a young science that many specific questions do not yet have clear scientific answers. Therefore I also mention the latest research in some new areas (e.g., molecular genetic studies of personality), but I emphasize that these results are provisional.

Personally, learning about personality psychology has changed some of my beliefs about human behaviour. For example, in accordance with the values of the 1970s, I believed in individuals' freedom to shape their own personality. I was very influenced by existentialists' writers that everything is ultimately a personal choice. This helped me to overcome some anxiety and to travel to Nepal and China for four months on my own. However, the same trip also taught me that there are limits to our ability to change. Although it was an amazing trip, I had a few panic attacks during the trip and I learned that traveling around the world alone is not for everybody. Learning about personality helped me to better understand myself and the way individuals are different from each other. Personally, I was able to find a place in this world that fits my personality. It is my hope that you can also take something valuable away from learning about personality from a scientific perspective.