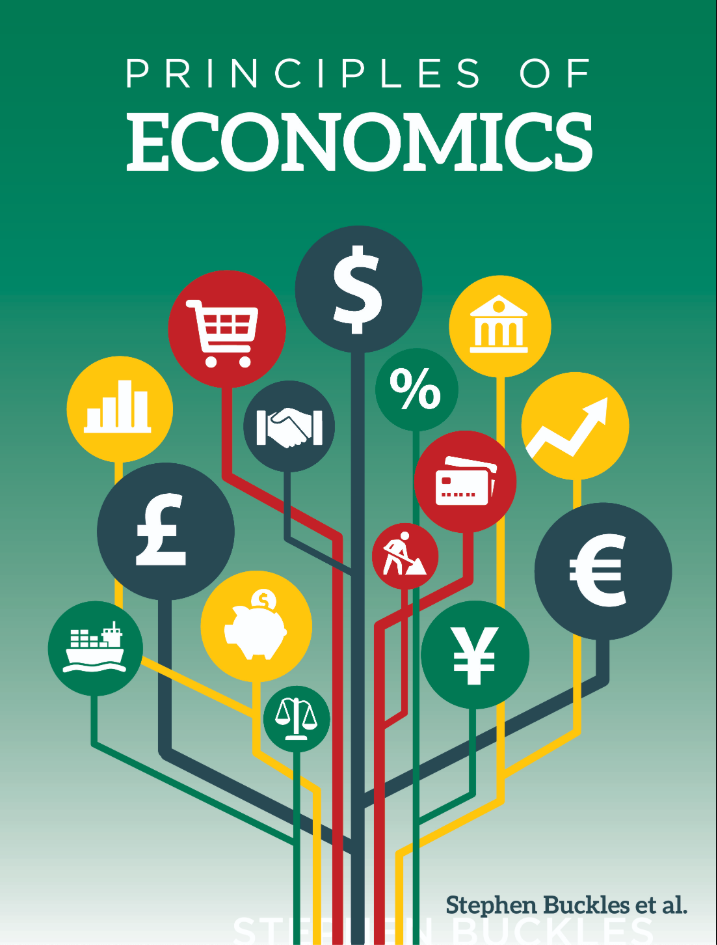 Principles of Economics will allow you to learn a new set of tools to use in personal, professional, business, and political decision making.

Comparison of Principles of Economics Textbooks

Consider adding Top Hat’s Principles of Economics textbook to your upcoming course. We’ve put together a textbook comparison to make it easy for you in your upcoming evaluation.

Stephen Buckles is a Senior Lecturer at Vanderbilt University, where he also received his Ph.D. in Economics. Buckles has been the recipient of numerous awards, including Madison Sarratt Prize for Excellence in Undergraduate Teaching (Vanderbilt, 2008), Kenneth G. Elzinga Distinguished Teaching Award (Southern Economic Association, 2006), and the Dean’s Award for Excellence in Teaching (Vanderbilt, 2007). His course pack, which this text is based on, has been used by thousands of students and engages the concepts of active learning.

PJ Glandon joined Kenyon College as an Associate Professor of Economics after completing his Ph.D. at Vanderbilt University.

Stephen Buckles is a Senior Lecturer at Vanderbilt University, where he also received his Ph.D. in Economics. Buckles has been the recipient of numerous awards, including Madison Sarratt Prize for Excellence in Undergraduate Teaching (Vanderbilt, 2008), Kenneth G. Elzinga Distinguished Teaching Award (Southern Economic Association, 2006), and the Dean’s Award for Excellence in Teaching (Vanderbilt, 2007. His course pack, which this text is based on, has been used by thousands of students and engages the concepts of active learning.

PJ Glandon is an Assistant Professor of Economics at Kenyon College and received his Ph.D. in Economics from Vanderbilt University. His current research focuses on the role that sales play in business cycles and has also done research on how grocery stores adjust their pricing behavior following the entry of Walmart into the market. In 2011, he received the Rendigs Fels Award for Excellence in Teaching from Vanderbilt University and the “A Teacher Who Made a Difference” Award from University of Kentucky College of Education in 2012.

​Christopher Cotter is an assistant professor of economics at Oberlin College. He received his Ph.D. in economics from Vanderbilt University, where his dissertation focused on the financial history of the U.S. He teaches introductory economics as well as courses on finance and the history of financial crises. Currently, his research focuses on historical banking panics as well as the link between finance and economic growth in a historical context.

Cynthia Benelli is a continuing lecturer and faculty advisor at UCSB. A direct quote from one of her classes "Economics has the ability to radically change the way you see the world around you. It is a dynamic, interesting, and logical way of viewing the behavior of people, businesses, and the government. Economics taught well has the ability to change the way you think...forever. The subject is that powerful." This belief in economics is echoed in her teaching. She studied economics in San Diego and continued her education in Santa Barbara where she was awarded her Ph.D. She then began teaching with the singular goal of inspiring students to see economics in all aspects of their lives. She has three children who love playing economic games with her. In her spare time, she likes to watch people and use economics to explain what she sees.

Dr. Zuchegno is a professor of economics with over 20 years of experience in both the academe and private consulting industry. For the last 8 years, he has been a Visiting Professor at the University of Denver. Prior to his time in Denver, he was a faculty member at the Economics Institute in Colorado where he was head of the Professional Development Program and later Director of the Graduate Preparation Program. Dr. Zuchegno's teaching record features such disciplines as Economic Theory, Mathematical Economics, Money, Banking & Financial Markets, International Economics, and many other. In addition to his teaching schedule, Dr. Zuchegno has been involved in a variety of management and administrative aspects of international educational programs, including budgeting, curriculum development, student services, and advisory services to both students and faculty. While pursuing his academic interests, Dr. Zuchegno provided consulting services to USAID and overseas financial institutions and governments in the design and implementation of training programs in banking, public finance, monetary policy and other subject areas. Dr. Zuchegno has recently been named one of the top 125 faculty in the US by Dow Jones Co. to incorporate technology in the classroom.

​Dave Brown earned his Ph.D. from Kansas State University and has been working at The Pennsylvania State University as a Senior Lecturer and Director of Economics. His research interests include Industrial Organization, Applied Microeconomics, and Labor Economics. Dave has a very strong teaching record. While teaching at Penn State, Dr. Brown has had the pleasure of receiving the Economics Department Teaching Award in 2011 and 2014 and the Influential First Year Instructor Award in 2011, 2012, 2013, and 2014. During his time at Kansas State University, he also received the Presidential Award for Teaching Excellence in 2008. Numerous students have decided to major or minor in Economics after completing his principles course.

​John Swinton is a Professor of Economics and Director of thee Center for Economic Education at Georgia College and State University. He received his Ph.D. in Economics University of Wisconsin-Madison, with his areas of interest being economic education, environmental and natural resource economics, and public economics. He has received the Rising Star Award and the Henry H. Villard Research Award from the National Association of Economic Educators in 2010 and 2013 respectively.

Li Feng is an Associate Professor of Economics at Texas State University, where she teaches Principles of Microeconomics, Intermediate Microeconomics, Public Finance, Managerial Economics, and Understanding and Analyzing Organizational Problems, all at the MBA level. She received her Ph.D. in Economics and Specialist in Education degree (Ed.S.) from Florida State University. She has taught at SUNY Fredonia and Shannxi Normal University. Li is also a Nonresident Fellow with the Brookings Institution in D.C. and an adjunct economist with the RAND Corporation.

Marianne Wanamaker is an associate professor of Economics and the BB&T Scholar in Markets, Capitalism and Ethics at the University of Tennessee. She is an economic historian whose research focuses on the long-term integration of black men in the American labor market. She teaches or has taught undergraduate courses in Principles of Micro/Macro, Introduction to Economics for MBA students, and undergraduate Business Ethics. While at UT, Wanamaker has been the recipient of multiple teaching awards, including two MBA teaching awards, an outstanding teacher award for the Haslam College of Business and the university’s Alumni Outstanding Teacher Award.

​Ralph Sonenshine is an Assistant Professor of Economics at American University, where he also received his Ph.D. Ralph combines an academic background in industrial organization, international economics, and economic history with business consulting and industry research expertise. His research and teaching interests include antitrust, mergers and acquisitions, international trade and finance, financial economics, and industry studies (e.g. electric utilities, oil and gas, and financial services).

​Rita Madarassy is a Lecturer at Santa Clara University in California, where she teaches Principles of Microeconomics and Macroeconomics, International Economics Growth and Development, and Econometrics. Her research area includes international finance and exchange rates. She obtained her PhD from the University of California, Santa Cruz and speaks 4 languages: Hungarian, English, Turkish, and French. Rita is an active user of Top Hat Lecture in her classroom and loves the way she is able to interact and engage her students in the course material with it.

​Susan Carter is an Assistant Professor of Economics at the United States Military Academy, West Point. She received her PhD in Economics from Vanderbilt University with her research focusing on consumer finance, payday loans, and consumer bankruptcy. She is the recipiant of Murdy Award for Teaching Excellence at West Point in 2013 and also received Superintendents Certificate of Appreciation at West Point in 2016.

Zara Liaqat is a lecturer in the Department of Economics at the University of Waterloo. She holds a Ph.D. in Economics from the University of Southern California. Zara’s current research and expertise are in the fields of international and labor economics. Her teaching portfolio encompasses a wide range of courses and she has also taught at Wilfrid Laurier University and Lahore University of Management Sciences. She considers student learning and engagement in the course as essential constituents of her teaching philosophy.

1. Introduction to Economics
2. An Economic Model
3. The US and World Economy
4. Demand, Supply, and Markets
5. Using Supply and Demand

6. Behind Demand
7. Behind Supply
8. Inputs, Productsion, and Costs in the Long-run
9. Competitive Markets
10. Monopoly
11. Between Perfect Competition and Monopoly
12. Regulation of Firms with Market Power
13. The Economic Role of Government
14. Markets for Labour
15. Taxes - Efficiency and Fairness
16. Why International Trade?
17. Capital and Financial Markets
18. Economics After Microeconomics

19. Gross Domestic Product, Unemployment, and Inflation
20. Economic Growth
21. Spending
22. Aggregate Demand, Aggregate Supply, and a New Equilibrium
23. Full Employment and a New Long-run Equilibrium
24. Money
25. Monetary Policy
26. Fiscal Policy
27. Trade Defecits
28. International Currency
29. What We Have Learned and What We Have Not Learned