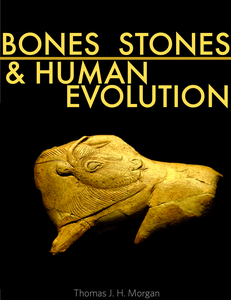 Bones, Stones & Human Evolution combines text, images, videos and embedded questions to introduce you to the essentials of evolutionary anthropology.

The goal of this textbook is to introduce undergraduate students, as well as interested members of the public, to the key topics of study within my field of research: evolutionary anthropology. As such it is very broad ranging, and so whatever type of evolutionary anthropology you are interested in, this book will, I hope, be a good place to start. While this breadth can be intimidating, the flipside is that the book doesn't delve too deep into any particular topic.  Readers hoping for a deeper treatment of any of the topics covered in this textbook should seek out more specialized sources, and throughout this book I suggest sources for further reading or watching.

The book is arranged around 7 key topics, which form the seven modules of this book, and with each module including around 6 chapters. The first four modules are largely theoretical or background information that cover the development of the tools we use to study human evolution:

The next three modules then explore how these elements have played out in our own evolutionary history:

Whatever your background or motivations for reading this book, I hope you find it engaging, enjoyable and rewarding.