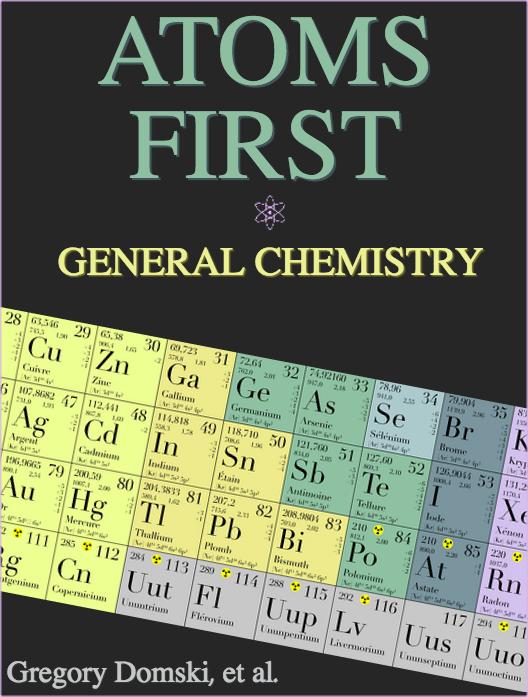 This book helps students understand atoms, ions, and molecules conceptually before they encounter the topics of stoichiometry, kinetics, and thermodynamics.

Consider adding Top Hat’s Atoms First General Chemistry to your upcoming course. We’ve put together a textbook comparison to make it easy for you in your upcoming evaluation.

Content meets standard for American Government. Constantly revised and updated by a community of professors with the latest content

Greg Domski received his M.S (2005) and Ph.D (2008) in Inorganic chemistry from Cornell University, Ithaca, NY. He is currently an Associate Professor of Chemistry at Augustana College in Illinois, teaching General, Organic and Inorganic chemistry. His research interest include the development of novel binuclear donor-functionalized N-heterocyclic carbene transition metal complexes for transfer hydrogenation catalysis and the development of transition metal-based olefin polymerization catalysts. Greg also works closely with his students in developing their research and presenting their findings.

Greg Domski earned his Ph.D. at Cornell University where he developed organometallic catalysts for living, stereoselective olefin polymerization. He is currently an associate professor of chemistry at Augustana College (Illinois) where he teaches general, organic, and inorganic chemistry. His current research interests include synthesizing novel organometallic complexes and evaluating their catalytic potential in various organic transformations. He is also the Assistant Editor and Author of Top Hat General Chemistry.

Samuel Alvarado is an assistant professor of chemistry at the University of Wisconsin-River Falls. He earned his Ph.D. in inorganic chemistry from Iowa State University on the role of molecular precursor reactivity in the formation of colloidal nanocrystals. He was a visiting assistant professor at Carthage College before moving to River Falls, where he now teaches general and inorganic chemistry. His current research interests are in the synthesis and electronic structure of magic-sized nanoclusters.

Henry Kurtz is a Professor of Chemistry at the University of Memphis.  He received his B.S in Chemistry from Georgia Institute of Technology (1972) and Ph.D. from the University of Florida (1977).  He has been at the University of Memphis since 1983 and has held positions of department chair and dean of the College of Arts & Sciences. He has taught general chemistry courses throughout his time at Memphis.  He also maintains a research program in theoretical and computational chemistry focusing on nonlinear optics and the interactions of molecules with electric fields.

Dr. Ginger P. Redd is a full-time faculty member with the Department of Chemistry at North Carolina Agricultural and Technical State University where she teaches physical science, introductory chemistry, general chemistry and organic chemistry. She received her B.S. in Chemistry from Alcorn State University in Lorman, Mississippi.  Later, she was awarded a Ph.D. in Medicinal Chemistry from the University of Mississippi in Oxford, MS. Her research interests include increasing the recruitment and retention of STEM majors, the incorporation of educational technologies to engage STEM learners and the persistency of women in chemistry.

Bradley Wile attended St. Francis Xavier University in Antigonish, NS where he received his B.Sc. in Chemistry in 2002. He then moved to Dalhousie University in Halifax, NS where he pursued an interest in late transition metal catalysis. After completing his Ph.D. in Inorganic Chemistry in 2006, Dr. Wile moved to Cornell University as a postdoctoral researcher. He served as a Visiting Assistant Professor of Chemistry and Hamilton College from 2008 to 2010, before moving to Ohio Northern University, where he is currently an Associate Professor of Chemistry. He enjoys teaching general and inorganic chemistry, and maintains an active research group focussed on creating new catalysts.

Amanda Wilmsmeyer is an assistant professor of chemistry at Augustana College in Rock Island, Illinois where she teaches general and environmental chemistry. She focuses her research on the surface chemistry of volatile organic compounds adsorbed to different sorbent materials. Prior to joining Augustana, Amanda earned her Ph.D. in Analytical Chemistry from Virginia Tech where she focused on ultrahigh vacuum studies of organophosphonate adsorption. She earned her B.S. in Chemistry from Allegheny College.

Greg Domski earned his Ph.D. at Cornell University where he developed organometallic catalysts for living, stereoselective olefin polymerization. He is currently an associate professor of chemistry at Augustana College (Illinois) where he teaches general, organic, and inorganic chemistry. His current research interests include synthesizing novel organometallic complexes and evaluating their catalytic potential in various organic transformations. He is also the Lead Author of Top Hat General Chemistry.

Lisa Capriotti received her B.S. in Chemistry from Gettysburg College and her PhD in Chemistry and Biochemistry from the University of Delaware working on surface-induced peptide folding. As a postdoctoral researcher at Johns Hopkins University she developed biomaterials for tissue engineering. In 2009, she enlisted in the U.S. Navy and served on the USS VICKSBURG and the Naval Nuclear Power Training Command. Dr. Capriotti then joined the faculty at The Citadel Military College. Dr. Capriotti also teaches and competes internationally in the Olympic sport of Judo.

Paul Cooper is an Associate Professor at George Mason University. In 2000 he received a B.Sc.(Hons) and in 2005 a Ph.D. from The University of Western Australia. From 2005-2007 he held a NASA Postdoctoral Program Fellowship at NASA/Goddard Space Flight Center while researching the radiolysis of planetary ices. Since 2007 he has been at GMU where he teaches General and Physical Chemistry classes. In 2011 he was awarded an Outstanding Teaching Award from GMU’s College of Science, followed by a University Teaching Excellence Award in 2012.

Sherif Moussa is an Assistant Professor of Chemistry at Virginia Commonwealth University where he teaches General Chemistry and Physical Chemistry. He received his B.S. degree in chemistry from Ain Shams University, Egypt, his MS degree in Corrosion Science from Imperial College, London, UK, and his Ph.D. degree in Materials Science and Engineering from University of Missouri-Columbia, Missouri. He has more than 40 journal articles published, in addition to 3 provisional patents in the field of materials science and engineering as well as in nanotechnology.

James Ross is a chemistry professor, researcher, and author of several children’s chemistry books. James completed his B.S. and Ph.D. in chemistry at the University of Liverpool in Great Britain. He left his postdoctoral research to pursue a teaching career first in high school, and later in college. He was awarded an ASPIRE science teaching award in 2007 from Houston Independent School District. Today he is faculty in the department of chemistry at East Los Angeles College where he researches the impact of reading and student affect on exam performance.