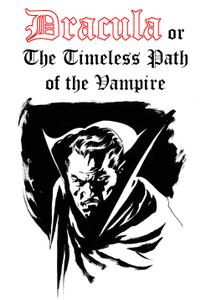 Dracula or the Timeless Path of the Vampire

This text is an overview of how the original vampire of Slavic folklore became the pop-culture phenomenon it is today with a variety of research-based questions.

I am often asked how I became "so" interested in vampires. In actuality, I was never really that interested in them. I always had some fascination with Halloween and ghosts, but like any child growing up in the United States, I simply knew what vampires were. They were around me on cereal boxes, in toy aisles, on television, or in films. I could recognize them instantly, but if asked where they came from or what they were originally I would have had no idea what to say. I would have had no idea where to even begin. Though above you can see a photograph taken of me dressed as Count Dracula during my 6th birthday party, which was Halloween-themed, it was simply what I chose by coincidence and nothing more. The fact is, I was not unique in choosing this costume or knowing vampires at a glance. Almost everyone today knows what they are by various clues, but few can explain where they came from. Or further, what it was, is, and how it relates to the human species. This is not so much a text about vampires, as it is a text about how human beings have coped with the world through symbols.

The essence lies in the fact that the vampire is perhaps the most powerful symbol we have ever created. The creature is one of the most recognizable images in popular culture today all throughout the world, not simply the United States. China, Iran, Mexico, it is everywhere. When viewing a film, reading a comic book, seeing an advertisement, or regarding any number of forms of media where the vampire manifests, people are able to identify one within seconds. Why? Why can we recognize it so quickly even though so few of us understand where it actually came from? Is it built into our subsconscious, this thing the vampire?  In some ways, yes. This is easily illustrated by watching a simple children's video from YouTube, shown below, created by a channel called "Pink Fong," a Korean educational channel that creates a variety of short films for children. In it you will find vampires, and like the author when he was a child, you can certainly pick out what is a vampire and what is not. Watch the brief video, be a child again for a few moments, and then take part in the discussion that follows.

Obviously there are vampires in this video, but how do you know? Respond with anything you noticed after watching the film that made it clear to you, the viewer, that the vampires were indeed vampires. There is NO wrong answer here, this is just an illustration that you can at least recognize vampires. Throughout this text you will learn why you can recognize them.

Where did all of these traits you and others discussed come from? Why do vampires seem to talk in a certain way? Why do they seem to often dress in dark clothing? Why do they have sharp teeth? Why do they rest in coffins? What is it with the stereotypical organ music sometimes connected with them? The interesting thing is that all of these traits, which today people consume worldwide, and which you yourself may recognize in a few seconds, have taken roughly 2000 or more years to develop. It is thus amazing, if one considers exactly how much time has passed for the images you saw in the video above to become intrinsic. Our goal is to not only understand where all of this came from, and why it looks the way it does today, but also to undertand how it relates to the human species and our endless quest to understand and better ourselves.

This online text serves as an elaboration and an expansion of what is presented in lecture, with information developed upon further and the presentation of topics which we lack the time to discuss. It also includes questions and discussions built into the text, which are part of your grade. Discussions are entirely for participation in most cases. Questions are graded on participation and correctness. Some questions are simple, based on reading the text, and prepare you for your two exams by tasting your general grasp of the knowledge presented in each chapter. Some are simply for fun with point-on-target responses. Other questions are worth more points because they take more work and involve short research projects and investigations into the vampire's symbolic power. There are twenty chapters in total, including this introduction. Interactive links and source links are highlighted in red. Let us now start from the beginning to understand the culture that created this thing called the vampire, the Slavs.