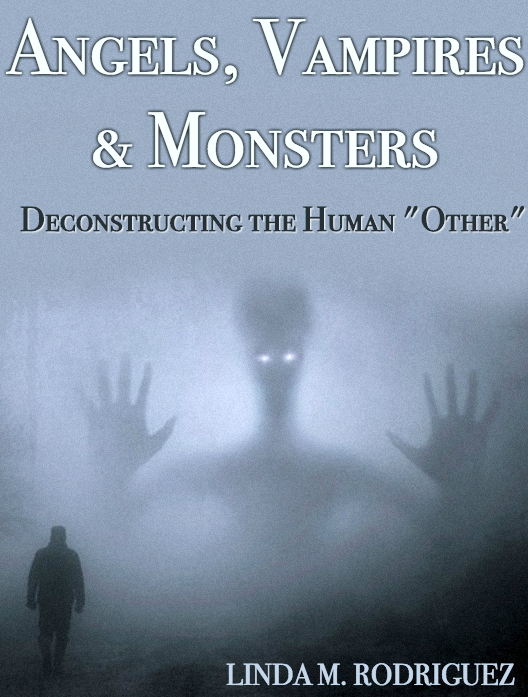 This books explores how films in the 20th and 21st centuries participate in the creation of a series of “Others” against which humans define and measure themselves.

ANGELS, VAMPIRES, and MONSTERS or DE-CLOAKING THE HUMAN "OTHER"

Alexander Pope wrote in the 18th C. in his Essay on Man: Epistle II:

The proper study of mankind is Man.

Today Pope is one of the most recognized poets in the world. He is the most often quoted English poet after William Shakespeare.


But the moment Pope was born in London on May 21, 1688 he was an outsider, he was "Other" and was considered a potential threat to society--- a MONSTER!

Both of Alexander Pope's parents were Catholics and in England in the 18th century that meant that you could not teach, attend a university, vote, or hold public office. If you did, you would be imprisoned for ever.


Yes! Put in prison for wanting to be included in normal human activities!


The underlying reasons for this discrimination was that the Establishment, or ruling class, wanted to keep their power and wealth.


During Pope's lifetime the ruling class was made up by upper class land-owners and aristocrats.


In fact, even today Queen Elizabeth II is the symbolical leader of the Anglican Church, also known as Church of England, and Parliament.

Definitely a uniting element of the Establishment in 18th century England was the politicized Anglican Church. So just for belonging to a religion that was not part of the Establishment, and the "dangers" these "Others" represented to the group in power,  Pope's family were banned from living in London.  By law, Catholics had to move at least 10 miles outside the city borders, and 10 miles was a long way in horse-driven 18th century life!


Trying to stay out of prison and stay alive, Pope's family moved to a small village in the countryside near Windsor Forest. As there was no school for Pope, he educated himself reading books and studying languages. But Pope got very sick and some critics have stated that he suffered from bone tuberculosis. Physically he was so affected that he stopped growing at 4 feet, 6 inches, and became a hunchback. He suffered constant physical pain and he could not dress himself and could not stand by himself toward the end of his life.

These physical differences, plus his family's religion, all made Pope even more "Other" in the eyes of the "norm". In fact, Pope suffered many attacks during his life time, not only for his writings but for his "non-normative" body. You can see images  that reflect how 18th C. English society portrayed Pope as a type of sub-human animal and defenseless "toy" at this link.

But Pope worked extremely hard and became the first independent and commercially successful writer in England, a type of 18th century J.K. Rowling of the well-known Harry Potter universe!

Another fascinating fact about Pope, or perhaps an expected  counter-measure (re-action), is that in NO official painting or bust, does he appear to have a hunchback or to be short of stature.

It is as if Pope were, feeling society's pressures, re-making himself through canvas and oil and stone,  trying to "normalize" the self-image he was leaving for posterity. And what he left was quite an edited version of himself.


Think about how many people in our present times "re-make" themselves through cosmetics and plastic surgery, sometimes even causing their own deaths.

What is your opinion of society's pressures to "fit in" or "normalize" one's image?

And yet, it has been noted that in many artistic renderings, Pope appears with a deep frown between his eyes like a person suffering from a bad headache or other physical pain, or a person undergoing a deep self questioning or emotional pain.


For example, we see Pope's frown in this 1852 painting titled: Pope Makes Love to Lady Mary Montague. The image is described as: "the moment after Alexander Pope declared his ardent love to Lady Mary. She has burst into a fit of laugher. He sits in pain, his pride hurt."

And Pope  did question himself and his abilities as we can see in the poem titled Epistle to Dr. Arbuthnot:


The Muse but serv'd to ease some friend, not wife, /To help me through this long disease, my life..."

Pope, as many who have been made to feel like the "Other" or "monsters," wrote of himself and talents as "problems", as some fate he did not deserve, an accident of birth or sin as he puts it.


In fact, later we will see how Pope's verses echo the Creature's complaints in Mary Shelley's Frankenstein; or, The Modern Prometheus published in1818 when the author was 20 years old. And as the Creature, Pope became bitter and began to counter-attack. As matters escalated, Pope reached the point where he poisoned the editor and bookseller, Edmund Curll.

Luckily, Curll didn't die but threw up for 2 days!  Pope even wrote a satirical piece making fun of the incident and adding "insult to injury" titled: A Full and True Account of a Horrid and Barbarous Revenge by Poison on the Body of Mr. Edmund Curll.

Did you know that "Frankenstein," considered by many the first science-fiction novel, had been written by a 20 year old woman? Were you surprised when you first learned this?

Sociologist, philosophers, feminists and many other researchers and thinkers have noted that the "Other"  is constructed as:


There have been some experiments that show how "othering" a specific group quickly affects them emotionally in very negative ways. Moreover, the group in power also quickly begins to behave in a very abusive way. Read about one of these experiments: Brown Eyes, Blue Eyes.

What is the "Brown Eye, Blue Eye" experiment? Do you know of any other similar experiments?

In these discriminatory systems, the ONE, the DEFAULT ("everything that does not need a signifier preceding it") is most often white, straight, middle class man.


For Pope this situation had some profound personal consequences (note that the "Other" is often considered "sub-human" by the dominant group). But in Pope's case, perhaps not all consequences were negative as he became an "artistic thinker," a poet, and in some ways, all his life was a questioning and a journey to better understand, or de-cloak, human nature.


No wonder Pope wrote in his Essay on Man:

"The proper study of mankind is Man... Created half to rise and half to fall; Great lord of all things, yet a prey to all; Sole judge of Truth, in endless Error hurl’d: The glory, jest, and riddle of the world!"

Perhaps discussion about the "Other" began in Ancient Greece when Aristotle stated:


"The female is a female by virtue of a certain lack of qualities; we should regard the female nature as afflicted with a natural defectiveness."


Aristotle considered (wo)men as defective men, not full men, not able-bodied, a kind of "monstrosity."


Statements as those of Aristotle have had  horrible consequences to the present day for women and groups of people considered "Others."

WHAT DOES IT ALL HAVE TO DO WITH OUR CLASS TOPIC?


This is a class that will challenge you to learn in an innovative manner and to think analytically about issues such as the "Other" and what is the "norm" and use discussions of  "normalcy" as a framework to think about human experimentation, evolution, and the use of technology and medicine to fulfill humanity’s dreams and desires.


In this class, we will learn about the elements of film and filmmaking by watching and analyzing complete and excerpts of films from the 20th centuary as: Freaks, Dracula, A Matter of Life and Death, It's a Wonderful Life, Night of the Living Dead, Blade Runner, Interview with the Vampire, Frankenstein, Gods and Monsters, and Batman Begins, and 21th century films as Splice, Ex Machina, and The Shape of Water.

We will also tackle the CRUCIAL BASIC QUESTION:


Also, carefully watching films, we will touch on a range of related questions:

The arts —poetry, stories, novels, paintings, drawings, graphics, and film— have participated in the exploration but also in the creation of a series of “Others” against which Human Beings, YOU and I, define and measure ourselves, and perhaps, even question our humanity!


Once I read a collection of essays edited by Claudine Chiawei O’Hearn, born in Hong Kong and raised in Asia and Europe. In her introduction to Half and Half: Writers on Growing Up Biracial and Bicultural she states:


“For those of us who fall between the cracks, being “black,” being “white,” being “Chinese,” being “Latino,” is complicated.” (XIV)

Having been born in the Caribbean and being partly Hispanic, partly Italian and partly unknown, and having grown up between Puerto Rico and England, I felt I had to keep researching and reading about those of us that "fall between the cracks" and the difficulties of not fitting in and yet somehow enjoying the benefits of being part of two or more worlds.

In summary, with particular attention to my own field of research —Caribbean literature and minority discourse— this class will explore how "Others," in the form of allegorical (symbolical) beings as angels, vampires, and monsters in myriads of shapes and forms, can help us better understand the ongoing struggle by each of us for self definition.

As 21st century humans, we all live in what some consider the Post-Human Era because of our high use and dependency on technology, but also our increasing inter-twining with intelligent technology, so that we are all becoming increasingly isolated and marginalized from each other.

Perhaps, to some degree, we have all become "Others" in search of our VANISHING HUMANITY.

Is this not the case of the protagonist Jake Sully, played by Samuel Henry John Worthington, and his allies in James Cameron's Avatar (2009)?

Now let's take a closer look at all these ideas through other unforgettable films!

Please post below any final thoughts, comments or questions about what you have read in the INTRODUCTION or links provided in this chapter:


O’Hearn, Claudine C. Half and Half: Writers on Growing Up Biracial and Bicultural. Penguin, 1998.