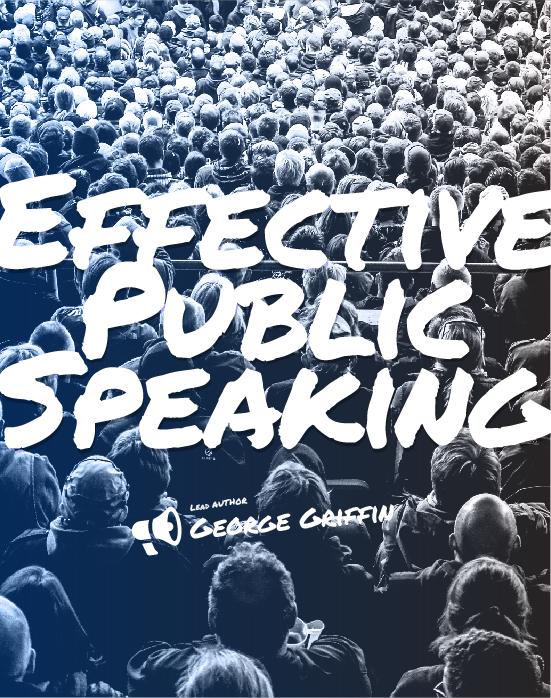 Consider adding Top Hat’s Effective Public Speaking textbook to your upcoming course. We’ve put together a textbook comparison to make it easy for you in your upcoming evaluation.

George Griffin earned his degrees at the University of West Florida and Auburn University. He has been teaching college, business seminars and workshops for over 30 years, while still doing public speaking engagements for non-profit organizations. Currently, he is serving as the Professor of Speech at Keiser University, Orlando, and as Adjunct Professor at Stetson University. George is also the author of “STAGE FRIGHT! A Student-Friendly Guide to Managing the Jitters.”

One of the advantages of a public speaking course is that you will learn how to turn off communication once in a while.

Competence and confidence are two of the qualities that can be developed through a public speaking course.

After you have completely mastered a new skill, you reach a level known as “Consciously Incompetent.”

Conversation and public speaking are entirely different forms of communication with very little in common.

One of the weaknesses of a speech class is that it doesn’t address the necessary skill of listening effectively.

The skills you learn in public speaking class can directly apply to many of the other classes you take in college.

One way to define “effective public speaking” is, “When you speak, something happens.”

The two ways in which we communicate with others are:

Which of the following professions do not really require effective communication skills:

Of the five levels of communication, which one describes communicating with yourself:

Communicating with an undefined and unquantified audience is known as:

Of the various elements of communication, which one do we engage most often:

Public Speaking class is a lot like taking a drivers’ education course because:

You see a lot of people “crash and burn”

You watch a lot of scary videos

You actually learn by doing

If you just read the book you’ll do fine

A symbol is any action or object that is used to

Developing any new skill will involve a four step process. Put the four steps in the correct chronological order: