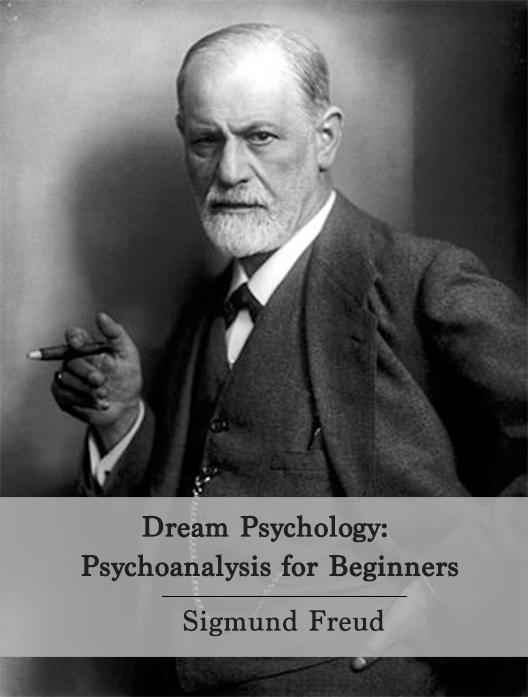 ​The medical profession is justly conservative. Human life should not be considered as the proper material for wild experiments.

Conservatism, however, is too often a welcome excuse for lazy minds, loath to adapt themselves to fast changing conditions.

Remember the scornful reception which first was accorded to Freud's discoveries in the domain of the unconscious.

When after years of patient observations, he finally decided to appear before medical bodies to tell them modestly of some facts which always recurred in his dream and his patients' dreams, he was first laughed at and then avoided as a crank.

The words "dream interpretation" were and still are indeed fraught with unpleasant, unscientific associations. They remind one of all sorts of childish, superstitious notions, which make up the thread and woof of dream books, read by none but the ignorant and the primitive.

The wealth of detail, the infinite care never to let anything pass unexplained, with which he presented to the public the result of his investigations, are impressing more and more serious-minded scientists, but the examination of his evidential data demands arduous work and presupposes an absolutely open mind.

This is why we still encounter men, totally unfamiliar with Freud's writings, men who were not even interested enough in the subject to attempt an interpretation of their dreams or their patients' dreams, deriding Freud's theories and combatting them with the help of statements which he never made.

Some of them, like Professor Boris Sidis, reach at times conclusions which are strangely similar to Freud's, but in their ignorance of psychoanalytic literature, they fail to credit Freud for observations antedating theirs.

Besides those who sneer at dream study, because they have never looked into the subject, there are those who do not dare to face the facts revealed by dream study. Dreams tell us many an unpleasant biological truth about ourselves and only very free minds can thrive on such a diet. Self-deception is a plant which withers fast in the pellucid atmosphere of dream investigation.

The weakling and the neurotic attached to his neurosis are not anxious to turn such a powerful searchlight upon the dark corners of their psychology.

Freud's theories are anything but theoretical.

He was moved by the fact that there always seemed to be a close connection between his patients' dreams and their mental abnormalities, to collect thousands of dreams and to compare them with the case histories in his possession.

He did not start out with a preconceived bias, hoping to find evidence which might support his views. He looked at facts a thousand times "until they began to tell him something."

His attitude toward dream study was, in other words, that of a statistician who does not know, and has no means of foreseeing, what conclusions will be forced on him by the information he is gathering, but who is fully prepared to accept those unavoidable conclusions.

This was indeed a novel way in psychology. Psychologists had always been wont to build, in what Bleuler calls "autistic ways," that is through methods in no wise supported by evidence, some attractive hypothesis, which sprung from their brain, like Minerva from Jove's brain, fully armed.

After which, they would stretch upon that unyielding frame the hide of a reality which they had previously killed.

It is only to minds suffering from the same distortions, to minds also autistically inclined, that those empty, artificial structures appear acceptable molds for philosophic thinking.

The pragmatic view that "truth is what works" had not been as yet expressed when Freud published his revolutionary views on the psychology of dreams.

Five facts of first magnitude were made obvious to the world by his interpretation of dreams.

First of all, Freud pointed out a constant connection between some part of every dream and some detail of the dreamer's life during the previous waking state. This positively establishes a relation between sleeping states and waking states and disposes of the widely prevalent view that dreams are purely nonsensical phenomena coming from nowhere and leading nowhere.

Secondly, Freud, after studying the dreamer's life and modes of thought, after noting down all his mannerisms and the apparently insignificant details of his conduct which reveal his secret thoughts, came to the conclusion that there was in every dream the attempted or successful gratification of some wish, conscious or unconscious.

Thirdly, he proved that many of our dream visions are symbolical, which causes us to consider them as absurd and unintelligible; the universality of those symbols, however, makes them very transparent to the trained observer.

Fourthly, Freud showed that sexual desires play an enormous part in our unconscious, a part which puritanical hypocrisy has always tried to minimize, if not to ignore entirely.

Finally, Freud established a direct connection between dreams and insanity, between the symbolic visions of our sleep and the symbolic actions of the mentally deranged.

There were, of course, many other observations which Freud made while dissecting the dreams of his patients, but not all of them present as much interest as the foregoing nor were they as revolutionary or likely to wield as much influence on modern psychiatry.

Other explorers have struck the path blazed by Freud and leading into man's unconscious. Jung of Zurich, Adler of Vienna and Kempf of Washington, D.C., have made to the study of the unconscious, contributions which have brought that study into fields which Freud himself never dreamt of invading.

One fact which cannot be too emphatically stated, however, is that but for Freud's wishfulfillment theory of dreams, neither Jung's "energic theory," nor Adler's theory of "organ inferiority and compensation," nor Kempf's "dynamic mechanism" might have been formulated.

Freud is the father of modern abnormal psychology and he established the psychoanalytical point of view. No one who is not well grounded in Freudian lore can hope to achieve any work of value in the field of psychoanalysis.

On the other hand, let no one repeat the absurd assertion that Freudism is a sort of religion bounded with dogmas and requiring an act of faith. Freudism as such was merely a stage in the development of psychoanalysis, a stage out of which all but a few bigoted camp followers, totally lacking in originality, have evolved. Thousands of stones have been added to the structure erected by the Viennese physician and many more will be added in the course of time.

But the new additions to that structure would collapse like a house of cards but for the original foundations which are as indestructible as Harvey's statement as to the circulation of the blood.

Regardless of whatever additions or changes have been made to the original structure, the analytic point of view remains unchanged.

That point of view is not only revolutionising all the methods of diagnosis and treatment of mental derangements, but compelling the intelligent, up-to-date physician to revise entirely his attitude to almost every kind of disease.

The insane are no longer absurd and pitiable people, to be herded in asylums till nature either cures them or relieves them, through death, of their misery. The insane who have not been made so by actual injury to their brain or nervous system, are the victims of unconscious forces which cause them to do abnormally things which they might be helped to do normally.

Physicians dealing with "purely" physical cases have begun to take into serious consideration the "mental" factors which have predisposed a patient to certain ailments.

Freud's views have also made a revision of all ethical and social values unavoidable and have thrown an unexpected flood of light upon literary and artistic accomplishment.

But the Freudian point of view, or more broadly speaking, the psychoanalytic point of view, shall ever remain a puzzle to those who, from laziness or indifference, refuse to survey with the great Viennese the field over which he carefully groped his way. We shall never be convinced until we repeat under his guidance all his laboratory experiments.

We must follow him through the thickets of the unconscious, through the land which had never been charted because academic philosophers, following the line of least effort, had decided a priori that it could not be charted.

Ancient geographers, when exhausting their store of information about distant lands, yielded to an unscientific craving for romance and, without any evidence to support their day dreams, filled the blank spaces left on their maps by unexplored tracts with amusing inserts such as "Here there are lions."

Thanks to Freud's interpretation of dreams the "royal road" into the unconscious is now open to all explorers. They shall not find lions, they shall find man himself, and the record of all his life and of his struggle with reality.

And it is only after seeing man as his unconscious, revealed by his dreams, presents him to us that we shall understand him fully. For as Freud said to Putnam: "We are what we are because we have been what we have been."

Not a few serious-minded students, however, have been discouraged from attempting a study of Freud's dream psychology.

The book in which he originally offered to the world his interpretation of dreams was as circumstantial as a legal record to be pondered over by scientists at their leisure, not to be assimilated in a few hours by the average alert reader. In those days, Freud could not leave out any detail likely to make his extremely novel thesis evidentially acceptable to those willing to sift data.

Freud himself, however, realized the magnitude of the task which the reading of his magnum opus imposed upon those who have not been prepared for it by long psychological and scientific training and he abstracted from that gigantic work the parts which constitute the essential of his discoveries.

The publishers of the present book deserve credit for presenting to the reading public the gist of Freud's psychology in the master's own words, and in a form which shall neither discourage beginners, nor appear too elementary to those who are more advanced in psychoanalytic study.

Dream psychology is the key to Freud's works and to all modern psychology. With a simple, compact manual such as Dream Psychology there shall be no longer any excuse for ignorance of the most revolutionary psychological system of modern times.