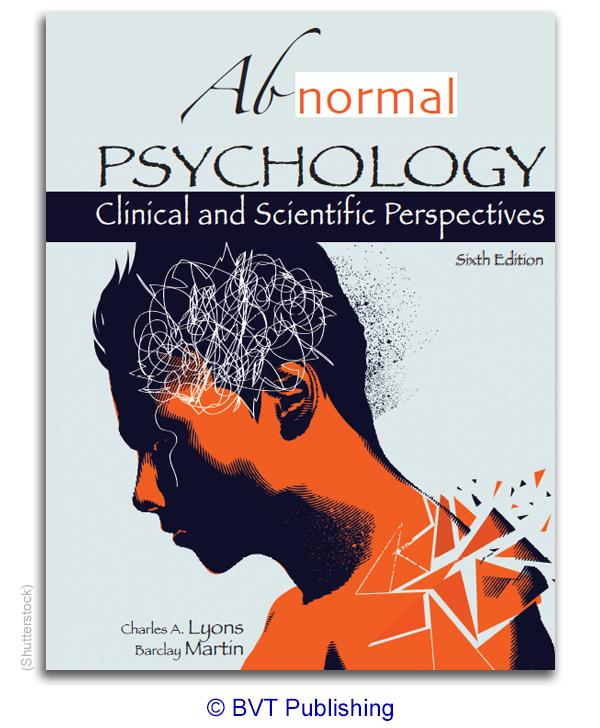 Abnormal Psychology, from BVT Publishing, is a concise yet comprehensive textbook with all of the content required for a primary text for students in undergraduate Abnormal Psychology or Psychopathology courses. It provides a thorough (and critical) overview of the official system for classifying mental disorders - the Diagnostic and Statistical Manual of Mental Disorders, Fifth Edition (DSM-5). This Top Hat version contains everything you need for before, during, and after class. Students can read fully customizable chapters with built-in active learning components and formative assessment elements. Each chapter is accompanied by PowerPoint slides with built-in comprehension questions and engagement tools. After class students can engage with pre-made, fully customizable homework assignments, plus chapter summaries for student review. There is also a comprehensive chapter-by-chapter Instructor’s Manual; pre-made customizable midterm and final exams; and extensive test banks.

Sixth edition, by Charles A. Lyons and Barclay Martin

All rights reserved. Printed in the United States of America. No part of this book may be used or reproduced in any manner whatsoever without written permission, except in the case of brief quotations embodied in critical articles and reviews. For information, address BVT Publishing, P.O. Box 492831, Redding, CA 96049-2831

Charles A. Lyons is Professor of Psychology at Eastern Oregon University, where he teaches courses in abnormal psychology, behavior analysis, clinical interventions, evolution and behavior, human sexuality, and psychological assessment. He earned his PhD from Utah State University, with a specialization in the analysis of behavior. As a licensed clinical psychologist, he worked for several years with inpatient populations at a large state psychiatric facility, where he provided treatment, assessment, and forensic evaluations. As a researcher, he has published articles on animal behavior, basic learning processes, language, and addictive behaviors. His most recent research interests include social and compulsive gambling and large-scale public lotteries.

The United States spends more money on mental disorders than on any other health condition, with heart disease and cancer trailing far behind (Roehrig, 2016). As important as that statistic is, it is not the main reason that it is incumbent upon us to understand more about these conditions. We all have friends or family members who have battled with mental health in some way. It is therefore important to learn what we can about mental disorders, including how they are identified, how they develop, how they can be treated, and, ultimately, how they can be prevented.

As in the previous editions of Abnormal Psychology: Clinical and Scientific Perspectives, this sixth edition was prepared with the goal of producing a readable, useful, inexpensive referenced resource that could serve as a primary text for students in undergraduate abnormal psychology courses. It provides a thorough (and critical) overview of the official system for classifying mental disorders—the Diagnostic and Statistical Manual of Mental Disorders, Fifth Edition (DSM-5)—describing the many ways in which the DSM-5 differs from its predecessors. As this text reviews both past and present treatment approaches and their supporting research, it also encourages students to think critically and to evaluate the strength of evidence.

This edition incorporates several features, including:

The original framework of Barclay Martin’s Abnormal Psychology: Clinical and Scientific Perspectives reflected the substantial changes taking place in clinical psychology and psychiatry in the early 1980s. At that time, a new diagnostic system for psychopathology (the DSM-III) had appeared and Martin recognized the implications of the shift from a more subjective and analytic era in abnormal psychology to the less theory-dependent, more objective DSM-III model. The value of a science of clinical psychology was becoming apparent and issues such as diagnostic reliability, validity, and empirical outcome data began to drive the classification and treatment of mental disorders.

The present text, built on that framework, reviews the extensive subsequent developments in research and practice since the DSM-III: In the past 36 years, the DSM has undergone four revisions—new diagnostic categories have been added, others have been proposed, and still others modified or removed. Thousands of research studies have been published, exploring the biological, genetic, social, cognitive, and behavioral foundations of psychopathology; the effectiveness of various psychological and biological interventions; the incidence of disorders among populations; and the usefulness of different classifications. A strongly biomedical model of abnormal behavior became dominant within psychiatry, enabling the proliferation of pharmacological interventions for nearly every DSM-identified condition. Still, many of the questions about etiology and treatment considered in Martin’s text remain unanswered. In nearly all cases of mental disorder, no biological markers or laboratory tests can identify or confirm any DSM diagnosis. Many contributory factors have been identified, but any necessary or sufficient causes of mental disorders remain elusive. Medications can offer some symptom relief; as of yet, however, they provide no cures, nor do they correct any presumed underlying biological abnormalities. Indeed, for many conditions, psychological interventions have been developed that are at least as effective as medication, with fewer side effects and lower risk of relapse.

The history of abnormal psychology contains many conceptual blind alleys and mistaken assumptions. Adopting a scientific perspective does not prevent such errors, but it does allow us to eventually recognize them. The current state of the science reminds us that we have often been too quick to oversimplify and too slow to think skeptically about both causes and treatments. Inevitably, mental disorders are defined within a social and cultural context, diagnosed within an interpersonal behavioral exchange, and treated within a biological-environmental interaction; thus, they are bio-psycho-social developments. Therefore, I have endeavored to avoid the use of the common terms mental illness or mental disease—which may imply that we know more than we actually do; instead, I refer to these conditions more accurately as mental disorders. It should be noted that this informed skepticism does not discount the very real distress and disability associated with many DSM conditions, nor the importance of prompt, effective treatment.

In such an environment, there is always a danger that pseudoscience can masquerade as an acceptable alternative. There are dozens, if not hundreds, of competing therapies for common disorders such as depression and anxiety. The high level of nonspecific (or placebo) response in treatment increases the risk of promoting ineffective therapies and medications and fosters conceptual confusion. Fortunately, such problems are ultimately solved by the scientific method itself through careful comparisons, empirical testing, and evaluation of outcomes. I have highlighted research involving direct treatment comparisons or the use of randomized controlled trials that provides empirical support for any particular therapeutic intervention over others.

Because the DSM model is so widely accepted, I have provided a careful description of the DSM-5, tracing the evolution of diagnosis and treatment within various categories of mental disorders, while also providing data on the reliability and validity of these diagnoses whenever possible. The professional literature on psychopathology is enormous and continually expanding. I have given preference to reviewing the more empirical and evaluative publications; as a result, articles from medical science, neuroscience, behavioral psychology, and cognitive psychology are overrepresented in the bibliography. I readily admit to a bias in favor of the scientific method over all other approaches in the field. However, I also accept that outcomes and consequences drive the selective process, and I realize that what may appear to be today’s truth may be tomorrow’s folly. We can expect continued shaping and revision of the content and structure of our diagnostic system, as well as our treatments, as some investigative pathways prove fruitful and others do not. I hope to have correctly reported the current state of affairs within this fascinating subject, without minimizing the many disputes, controversies, and unresolved issues that exist.