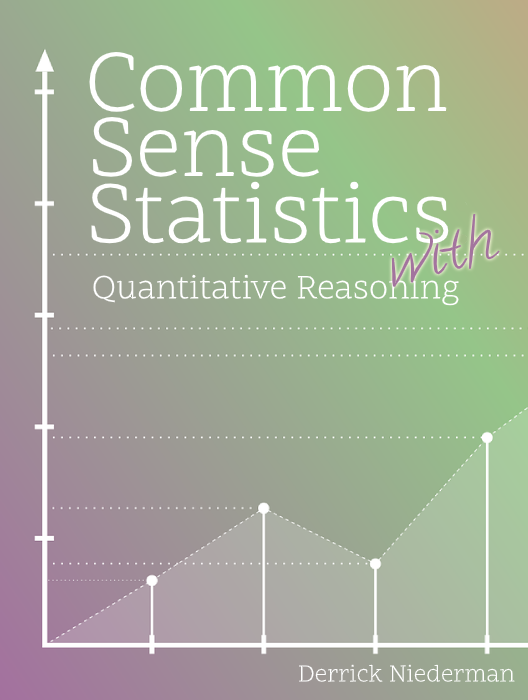 Finally! An introductory statistics book that’s truly introductory. Common Sense Statistics was written with the understanding that 1) not everyone excelled in math in high school, 2) many students sign up for introductory statistics not because of a lifelong curiosity about the subject but because they have to (horrors!), and 3) if you want to convert these students into satisfied customers, you have to dial down the formalism that has dogged statistics classes for far too long. The goal of Common Sense Statistics is simple: It aspires to be the friendliest math textbook its readers have ever seen. But don’t take my word for it. Have a look inside and see what you think!

What's this book all about? Plus a brief bio, if you're interested.

A FRESH LOOK AT PERCENTAGES

THE LAWS OF AVERAGES

Means and medians. Weighted averages. Quartiles and percentiles. Routine stuff, but with some exercises that aren't exactly routine.

Trying to make the standard deviation understandable. Plus, the Range Rule, Chebyshev's Theorem and an introduction to z-scores.

HOW TO READ GRAPHS AND CHARTS

We're all lifetime consumers of someone else's charts. It's time to understand good charts and bad ones. Where charts go wrong along both the x- and y-axes. Pareto charts and the 80/20 principle. Benford's Law.

The multiplication rule for counting. Factorials. The n​Cr​ function. Calculation of poker odds.

THE BUILDING BLOCKS OF PROBABILITY

The addition rule. The multiplication rule. Complementary and conditional probabilities.

Areas under the normal curve. The use of z-score area tables. The normal approximation to the binomial distribution.

Why the normal distribution shows up everywhere. The CLT for means and proportions. An applet for endless fun. Emphasis on the types of problems that the CLT enables you to solve.

Introduction of the error term. Interpretation of confidence intervals. Everything you wanted to know about sample sizes.

Understanding the formal steps through which hypotheses are made and tested statistically.

A scattershot review of U.S. election history through the lens of polling. Polling advances during the past 100 years. Where polls have gone wrong and what steps have been taken to improve them. Why polling is so hard!