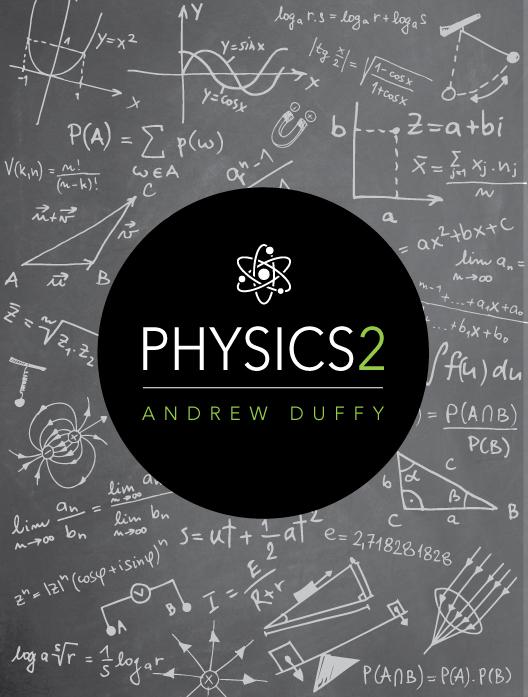 This textbook is an algebra-based introductory physics course that includes electricity and magnetism, circuits, waves and optics, and modern physics.

Mass and charge of some elementary particles:


Most matter, including ourselves, is composed of atoms. Atoms are themselves made up of three basic building blocks, the neutrons and protons that are found in the tiny nucleus of the atom, and then the electrons. As we can see in the table, protons and electrons have a charge, while neutrons are neutral (they have no net charge). The charge on an electron is the same magnitude, but has the opposite sign, as the charge on a proton. Note that the unit we use for charge is the coulomb (C).

Objects generally acquire a charge when they either lose electrons or acquire some extra electrons (we do this when we scuff our feet across a carpet, for instance). One way to charge an object is to rub it with a cloth made from a different material. Let's explore this further - we will investigate what happens when we do this with various combinations of materials. Such investigations go back as far as the ancient Greeks.

Experiment 1 - For our first experiment, we need a piece of silk, two glass rods, and one piece of string. Suspend one of the glass rods from a string tied around the middle of the rod so that the rod is balanced. Rub one end of the rod with the silk. Rub one end of a second glass rod with the silk, and then bring the rubbed end close to, but not touching, the rubbed end of the rod that is suspended from the string. What do you observe?

What you should observe in this case is that the end of the suspended rod moves away from the other rod - the suspended rod is repelled by the second rod. By Newton's third law, we know that the rods must be repelling one another with equal-and-opposite forces.

Again, what you should observe in this case is that the end of the suspended rod moves away from the other rod - the suspended rod is repelled by the second rod. By Newton's third law, we know that the rods must be repelling one another with equal-and-opposite forces.

In this situation, what you should observe is that the rods attract one another.

If we repeat these experiments with a variety of materials, we generally observe that all rubbed rods tend to act either like a glass rod rubbed with silk, or like a rubber rod rubbed with fur. Can we come up with a model, using charge, to explain these observations?

The model we use first says that rubbing one material with a different material generally causes a transfer of charge from one material to the other. All glass rods rubbed with silk, for instance, should acquire charge of the same sign. To account for the observation that identical charged rods repel one another, our model states that like charges repel. We also build into the model that unlike charges attract, explaining why a glass rod rubbed with silk will attract a rubber rod rubbed with fur – a rubber rod rubbed with fur must acquire charge of the opposite sign to a glass rod rubbed with silk. Our model also accounts for two types of charge, which we call positive and negative. Note that both types of charge can be obtained from the transfer of electrons, which have a negative charge. Rubbing a glass rod with silk generally transfers electrons from the glass to the silk, leaving the glass with a positive charge. Rubbing a rubber rod with fur generally transfers electrons from the fur to the rubber, giving the rubber a negative charge.


In many instances, an object has an equal number of electrons and protons, so the object has no net charge. It is quite easy to give an object a net charge, however. As we have learned, one way to charge an object is to rub it with a different material. For instance, rubbing a glass rod with silk transfers electrons from the glass to the silk, leaving the glass rod with a positive charge and giving the silk a negative charge. How effective this process is, and which material ends up with the negative charge, depends on where the two materials fit in the triboelectric series, shown in the table. "Tribos" is a Greek word meaning "rubbing", so triboelectricity is all about giving objects net electric charges by rubbing. Many centuries ago, the Greeks themselves did experiments with charge, rubbing amber with wool. It is no coincidence that the Greek word for amber is "electron."

Rubbing promotes charge transfer, but all that is necessary is to bring the two materials into contact, causing chemical bonds (which involve electrons) to form between them. Upon separation, the atoms in one material tend to keep some of the electrons while atoms in the other material tend to give them up. In general, the farther apart the materials in the triboelectric series, the more charge is transferred, with the material farther down the list acquiring electrons and ending up with a negative charge.

When an electric appliance, such as a television or refrigerator, is on, electric charges flow through the wires connecting the appliance to a wall socket, and through the wires within the appliance itself. Even so, it is generally safe to touch the cable connecting the appliance to the wall socket as long as the metal wires inside that cable are completely covered by rubber. This exploits the different material properties of metal and rubber, specifically the differences in their conductivity. Metals (which we classify as conductors) generally have conductivities that are orders of magnitude larger than the conductivities of materials like rubber and plastic - those materials we call insulators. The major difference between these two classes of materials is that, in an insulator, each electron is closely tied to its molecule, while some fraction of the electrons in a conductor (these are known as the conduction electrons) are free to move around.

When something is quantized it can not take on just any value - only particular values are possible. An example is money, which is quantized in units of pennies (in the USA and Canada, at least). It is possible to have $1.27, the equivalent of 127 pennies, but it is not possible to have 2/7 of a dollar. For something to be quantized does not necessarily mean that its allowed values are integer multiples of its smallest unit, but that is how things work with money and charge.

For now, we can say that the smallest unit of charge is

This is the magnitude of the charge on the electron and the proton.

Expressing charge quantization as an equation:


where n is any positive or negative integer.

Let's do an example that illustrates charge conservation. Two identical conducting spheres sit on separate insulating stands. Sphere A has a net positive charge of +8Q, while sphere B has a net negative charge of -2Q. The spheres are touched together briefly and then separated again. How much charge is on each sphere now?

How much charge on each sphere now?

How much charge do we expect each sphere to have now?

+6Q on each sphere

+3Q on each sphere

3. Remove the ground connection. This strands the transferred charge.

4. Remove the charged rod. The charge on the conductor redistributes itself, but the conductor keeps the net charge it has by the end of step 2.

An electroscope and a charged rod

Moving the rod away reverses the movement of the electrons, so the needle deflects less.