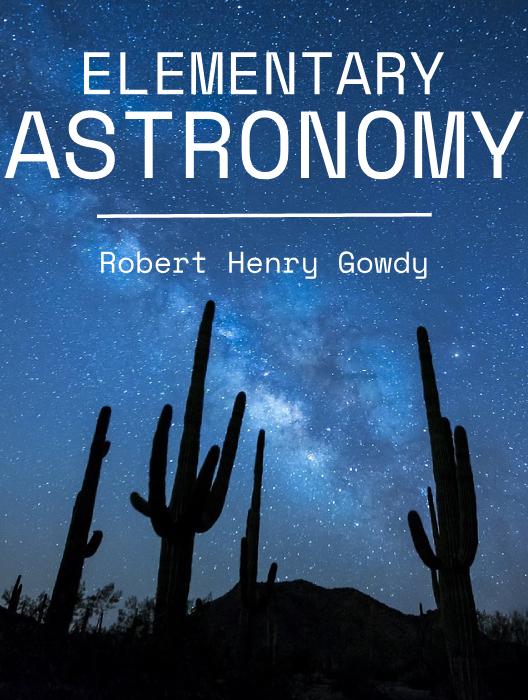 "Elementary Astronomy" provides the basic concepts and history of astronomy for use in a general education science course that is taken by non-science majors. It focuses primarily on solar system astronomy and the search for life as a way to introduce students to a wide variety of sciences, but also covers the basic concepts of stellar astronomy. The mathematics level should be suitable for a college-level course without mathematics prerequisites.

As the oldest of the sciences, Astronomy offers many examples of how the Scientific Method works. We will introduce the basic ideas of the Scientific Method gradually, in the context of these examples.  As a science that takes the entire universe as its subject matter, Astronomy incorporates and applies all of the other sciences. We will introduce basic ideas from Physics, Chemistry, Biology and other disciplines gradually, as they are needed.

Because this course is for general education, it is not intended to teach skills for solving specific types of problems. The introductory courses for science majors do that job quite well.   Instead, it teaches the basic vocabulary of science -- the facts that you need to know to evaluate scientific information. While it is true that you can (and should) look up anything you want to know on the internet, if you are not familiar with the basic facts of science, you will be easily misled.  As we will learn in later chapters, the facts of science are always revisable and open to challenge, but they can only be challenged by observations and are not open to debate.

​ Here and in the coming chapters, you will learn how the combination of measurements and well-tested models makes it possible to know things that we could never experience directly. We know the distance to the center of the Earth even though no one has ever gone there. Similarly, we know the temperature and chemical composition of the center of the Sun and many other seemingly impossible things. You will learn how very special life on Earth is when we discuss the conditions that might be required for life elsewhere. You will learn ways to think rationally about unlikely but terrifying events such as asteroid impacts. You will learn the power of the basic laws of motion that come from physics when we discuss the motion of planets and the prediction of asteroid impacts,. You will learn the origin of the Sun's energy and you will learn how life on Earth uses that energy.

1.1 Certain as the Sunrise

Every day we see the sun rise in the East, and set in the West. The day is always followed by night and the night is always followed by day. Our ancestors would have made this observation of the natural world. We can appreciate it emotionally and discuss it logically, but the observation itself does not come from emotion or logic. Instead, it comes from our interaction with the physical world outside ourselves, from our experience.

​In science, the word observe means actually experiencing something for yourself. It does not mean offering an opinion or looking it up in a table.

When everyone who repeats an observation experiences the same thing, the observation is said to be reproducible and becomes part of science.

The demand for reproducible observations is a relentless enforcer of honesty. When someone reports an observation that they did not make, that faked observation will probably not correspond to what others find when they attempt it.

To reproduce an observation, you need to know all of the important circumstances of the observation.

For example, consider the observation that the Sun rises in the East and sets in the West every 24 hours. Someone who repeats that observation in Murmansk, Russia, during midsummer will see the Sun circle the sky without ever completely setting at all. An important detail has been omitted: The observation must be made "in this part of the world."

In modern terms, informed by several thousand years of science, we would say that the observation must be made at latitudes less than 66.56 degrees north of the equator. Murmansk is at almost 69 degrees north latitude and is the largest city within the Arctic Circle.

Notice that an observation that is lacking some important detail can seem to be reproducible if it has only been tested under a limited set of conditions. A primitive society with no experience of conditions in the far north (or far south) of the Earth would naturally assume that everyone sees the sun move across the sky in the same way that they do.

Where does the Sun go?

​ At a very young age, infants learn to go from simple observations to mental models of what they are observing. The simplest sort of model is called "object permanence" and just means that something can be hidden or out of sight and still exist.

In the case of the Sun rising and setting, this model suggests that it is always the same Sun, which means that the Sun must somehow get back to the eastern horizon after setting in the west.

Most primitive cultures came up with a model of the Sun's motion that looks something like this:

Perhaps the Sun was transported under the flat Earth in a boat.

​The ancient Greeks are credited with the idea that this kind of prediction should be taken seriously. A worthwhile model of a situation must reproduce what is actually observed --- It must save the appearances.

The Greeks probably did not get a chance to compare notes about sunrise and sunset with travelers from north of the Arctic Circle, but they did note that travelers from Egypt reported seeing stars that could not be seen from Greece, contrary to what a flat-earth model would predict.

​How does one come up with a model that can predict the results of observations?

Pythagoras (born in 570 BCE) guessed that the Earth must be shaped like a sphere because that is the most elegant and harmonious shape that he could think of. It is not clear that observation played much of a role in his thinking except possibly by analogy: He could see that the Moon is round, so why not the Earth?

In modern terms, the nice thing about a spherical Earth model is that it has no edge and only one number is needed to specify the model completely, the radius R of the sphere. This type of model, with very few adjustable features, is regarded as elegant because it is risky. It makes definite predictions.  If it is wrong, observations will show that right away.

A flat Earth would have an edge of completely unknown shape and that would need far more than a single number to specify it. Such a model is regarded as messy and ugly because its adjustable features make it difficult to test. If you go looking for the edge of the Earth and do not find it, a defender of this model can just say that you did not go far enough.

Aristotle (born in 384 BCE) pointed out another attractive feature of a spherical Earth: It is self-consistent. If the Earth is a sphere, then gravity pulls things toward its center. However, if gravity pulls things toward the center of the Earth, that pretty much explains why the surface does not fall. It has already fallen as far as it can, which also explains the spherical shape, since all of its parts are as close to the center as they can get.


​He also noted that a spherical Earth would cast a curved shadow on the Moon and that is exactly what is seen during an eclipse of the Moon.

How Big is the Earth?

​Eratosthenes of Cyrene (born 276 BCE) knew that on the day of the summer solstice, the noon Sun near the city of Syene was straight overhead. At that same time in the city of Alexandria, north of Syene, the Sun was 7 and 12/60 degrees south of overhead.

Eratosthenes was able to figure out that the distance from Alexandria to Syene was about 5000 stadia. The circumference of the Earth had to be 50×5000 stadia or 250,000 stadia. A stadion is the length of a footrace stadium. Since he was in Egypt and using Egyptian charts, it might have made sense for him to use the Egyptian stadion, which was 157.5 meters.

​​The currently accepted value for the Earth's circumference over the poles: 40,008 kilometers, so Eratosthenes came pretty close.

Did Eratosthenes really do the measurement?

Because the Great Library at Alexandria was an amazing firetrap (wood shelves, papyrus scrolls, etc.), it burned several times and many of the early Greek manuscripts were lost.  All of the descriptions that we have of Eratosthenes are second-hand in what were essentially astronomy textbooks. As we will see later, the ancient Greeks often did thought experiments but did not always do the actual experiments. My opinion is that Eratosthenes was the right man at the right place to do the measurement. He is credited with inventing the modern longitude and latitude system and was the director of the Great Library at Alexandria. He would have been in charge of all of the maps in a military empire (the empire of Alexander the Great).  He was in charge of the surveyors who made the maps and could have been delegated to find where the Sun angle was vertical at high noon on the summer solstice.  He is said to have written three books about the project, so it was a major operation.

How could anybody know that?

​There is no way to lay a tape measure through thousands of miles of solid and liquid rock and iron.

Nevertheless, by using the spherical model of the Earth and a little geometry, Eratosthenes' measurement of the circumference gives us the radius:

​By using a combination of actual measurements and well-tested models, we can calculate the temperature at the center of our Sun and many other things that we could never measure directly.  Without setting foot off of our planet, we can measure the distance to every star that we can see.