Top Hat Intro Course - Organic Chemistry I & II is designed for instructors who want an active, dynamic, and understandable approach to support their own efforts in the classroom. This ever-evolving textbook includes auto-graded questions, videos and approachable language in order to make difficult concepts easier to understand and implement.

This chapter also presents reactions with carboxylic acids that will be examined in more detail in Chapter 25. This is to allow students to obtain an overview of the reactions and become comfortable with the various reactions before studying the reaction in mechanistic detail.

It will be of interest to know that many natural products and pharmaceutical products contain this carboxylic acid functional group.

In the IUPAC system of naming, if the COOH group (also written as CO2H) is attached to a straight carbon chain, then locate the longest continuous carbon chain (LCC) containing the carboxyl group and name by replacing the “e” ending of the alkane name with the suffix “-oic acid.” However, if the COOH group is directly attached to a ring, then name the ring and add the word carboxylic acid.

Carboxylic acids with other functional groups are named according to the following rules:


Organic compounds with two carboxyl groups are called diacids and are named as alkanedioic acid. In this case, the “e” of the alkane ending is not removed; rather, the suffix “dioic acid” is added to the alkane name.

What is the IUPAC name for the following compound?

What is the structure of 2-cycloheptenecarboxylic acid?

What is the IUPAC name for the following compound?

Match the following structures with their correct name. 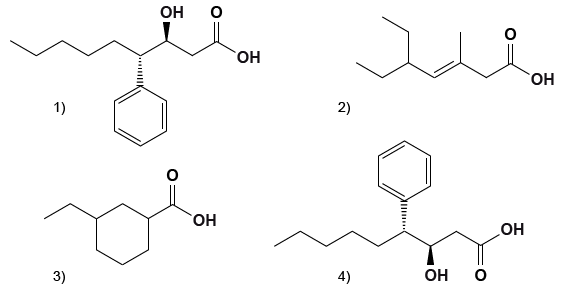 Acetic acid is one of the most important commercial carboxylic acids and is produced in large quantities in the United States for use in the food industry and as an industrial solvent. White distilled vinegar is used inside and outside the home for cleaning, laundry, cooking, automotive care, pickling, and canning, to mention a few.

Acetic acid is used in the food industry as vinegar and is produced by the fermentation of sugar or starch to give ethanol, which is further subjected to oxidative fermentation.

Another industrial approach for producing acetic acid is from a rhodium-catalyzed reaction of methanol with carbon monoxide.

Acetic acid can also be produced industrially from the catalytic oxidation of ethylene to give acetaldehyde, which in turn is catalytically oxidized to acetic acid.

Benzoic acid is another commercially important carboxylic acid that is used as a food preservative and as starting material for the synthesis of some drugs like p-aminobenzoic acid (PABA), which is a component of folic acid and B-complex vitamins.

Some of the methods for the preparation of carboxylic acids have already been discussed in previous chapters. We are going to review some of these methods and then introduce two more synthetic methods.

The oxidation of aldehydes and primary alcohols uses strong oxidizing agents (like Na2Cr2O7/H2SO4/H2O or KMnO4/H2O) to give a carboxylic acid.

These oxidants can convert both 1o alcohols and aldehydes to carboxyl groups and 2o alcohols to ketones but have no effect on 3o alcohols.

Aldehydes can also be oxidized with Tollens’ reagent.

Predict the missing product in the reaction below. 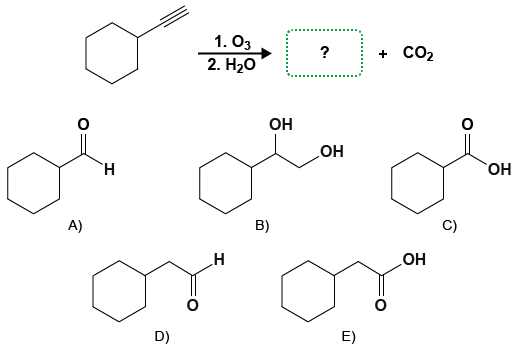 Draw the product of the reaction.

This Content is Locked
Only a limited preview of this text is available. You'll need to sign up to Top Hat, and be a verified professor to have full access to view and teach with the content.

Need a hint? Click here to see an explanation of the solution.

Predict the product of the reaction. 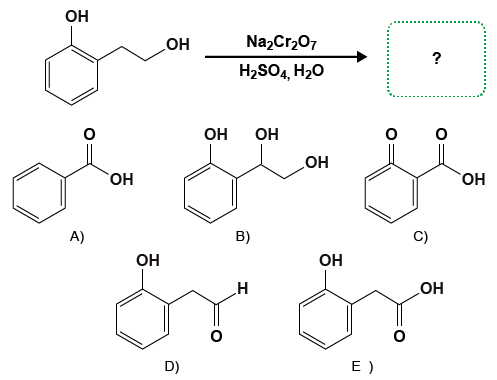 The side chains of alkylbenzenes can be oxidized to carboxyl groups using hot KMnO4 or hot chromic acid provided that the benzylic position has at least one hydrogen atom.

Nitriles are compounds containing a cyano group. Nitriles can be converted to carboxylic acids when heated with aqueous acids.

This reaction affords the synthesis of carboxylic acids from alkyl halides using a two-step process. The first step proceeds via an SN2 mechanism to give the nitrile, which is subsequently subjected to hydrolysis (the mechanism for the hydrolysis reaction is given in Chapter 25).

Mechanism of carboxylation of the Grignard reagent:

Note that the synthesis of carboxylic acids via hydrolysis of nitriles and carboxylation of Grignard reagent involves the introduction of one extra carbon atom.

What product is formed from the reaction sequence? 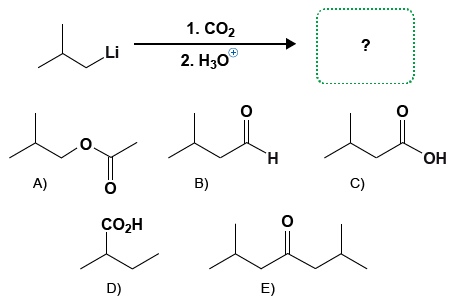 Predict the product of this reaction. 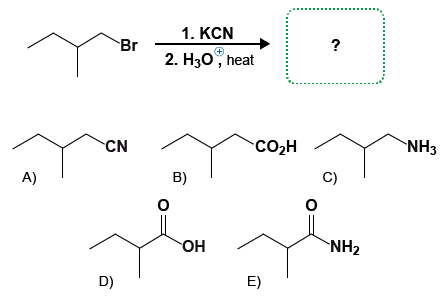 Which of these reagents will not give the transformation below? 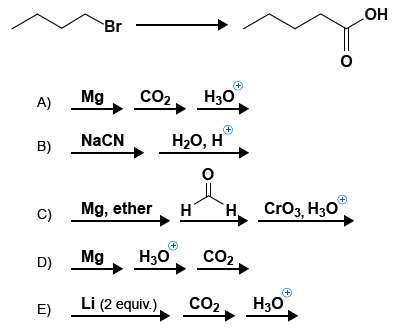 The aldehydes, ketones, carboxylic acids, and acid derivatives shown below all contain a carbonyl group (acyl group). Hence, one might think that all will undergo the same types of reactions since the only difference is their leaving groups. However, there is a big difference between a carbonyl functional group bonded to a good leaving group or a poor leaving group.

The base-catalyzed mechanism involves the use of strong nucleophiles. This mechanism is a two-step reaction. The first step is a nucleophilic attack on the carbonyl carbon (nucleophilic addition) and the second step is the loss of the leaving group (elimination).

The acid-catalyzed mechanism involves the use of weak nucleophiles. Under the acid-catalyzed condition, the carboxylic acid is first protonated to activate the carbonyl group. The activated acyl group is then attacked by the weak nucleophile (Nuc-H) followed by subsequent deprotonation, loss of the leaving group, and deprotonation to give the acyl substitution product. In the general reaction below, LG is a good leaving group, such as a halogen.

Carboxylic acids and their derivatives are seen in countless bioactive molecules. They are also important for various biological functions and regulatory processes. Check out a small sampling of these molecules below!

Carboxylic acids, as the name implies, are organic Brønsted–Lowry acids and so can participate in two types of reactions:

Acid–base reactions: Carboxylic acids can easily react with Brønsted–Lowry bases to form a carboxylate ion provided a weaker conjugate acid and base are formed in the reaction. An acid can be deprotonated by a base that has a conjugate acid with a higher pKa value. Hence, strong nucleophiles like the hydroxyl group, NH3, and RNH2 are strong bases that undergo acid–base reactions. As shown in Figure 24.24, the acid-base reaction would be much faster than the nucleophilic acyl substitution reaction since a weaker acid-base pair is formed.

This reaction, which is typical of carboxylic acids and their derivatives, is called

Which would be a reasonable intermediate in the mechanism for this acid-catalyzed hydrolysis? 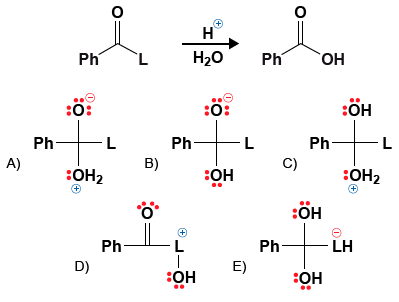 Which intermediate is involved in the mechanism of this base-catalyzed hydrolysis? 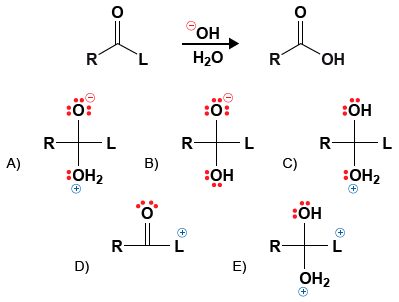 When treated with an alcohol under acidic conditions, carboxylic acids are converted to esters. This synthetic approach is called Fischer esterification.

The first step in Fischer esterification is the protonation of the carbonyl oxygen, which activates the acyl group. This is followed by addition of the nucleophile (alcohol), and elimination of the leaving group (water), with subsequent deprotonation to give the ester product shown below.

When the γ- or δ-hydroxyl carboxylic acids are used, they lead to intramolecular esterification giving a 5- or 6-membered ring lactones, respectively, as shown below.

Provide the major organic product of the reaction shown below.

Predict the major organic product of the reaction shown. 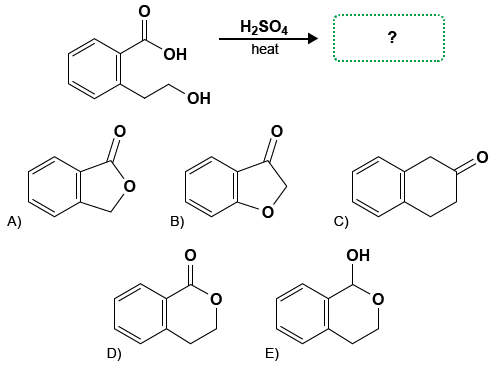 Which of the following conditions will drive the equilibrium of the Fischer esterification towards ester formation?

Removal of water as it is formed

Addition of an inorganic acid as a catalyst

The methyl ester of a carboxylic acid can be synthesized directly using _________.

Both options B and D are correct.

Predict the major organic product of the reaction shown below: 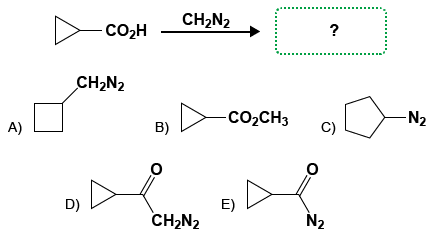 24.7 Condensation of Carboxylic Acid with Amines

Choose the correct product of the reaction below.

Ways to efficiently make amides from amino acid building blocks have been highly sought after for decades. The synthesis of peptides and polypeptides, which are chains of amino acids connected by amide linkages, was a notable challenge in the 20th century.


One of the breakthroughs in peptide synthesis comes from UCLA alumnus Robert Bruce Merrifield (BS 1943; Ph.D. 1949) who won the Nobel Prize in Chemistry in 1984, for his work on solid-phase peptide synthesis. Over time, this methodology has seen significant improvements in scope and utility.

There are countless examples of amide bond-forming reactions from carboxylic acids in biology. One of them can be seen in the synthesis of glutathione, an important antioxidant found in plants, animals, and fungi.


Glutathione is synthesized from three amino acids (glutamate, cysteine, and glycine) using two amide bond forming reactions. In both cases, the amide bonds are formed from the coupling of carboxylic acids and amine substrates.

Using the image above, predict the structure of the amide product γ-glutamylcysteine formed after coupling of glutamate and cysteine.

24.8 Reduction of Carboxylic Acids (For a detailed mechanism see Chapter 25.3.2)

The first step in this reaction is the deprotonation of the carboxylic acid. This is possible since the LiAlH4 is both a strong nucleophile and a very strong base. Hence, deprotonation of the carboxylic acid by LAH will lead to the liberation of hydrogen gas and the formation of carboxylate ion. The rest of the mechanism could proceed via several possible paths. The most likely path is the nucleophilic addition of hydride ion from AlH3 to the carbonyl group of the lithium carboxylate to give an aldehyde.

Once the aldehyde is formed, it is further reduced by LiAlH4 to give an alkoxide, which is then protonated by adding water to give a primary alcohol.

The limitation of using LAH is that it reduces all compounds with a carbonyl group. An alternate approach to reducing carboxylic acids to primary alcohols is to use the borane-tetrahydrofuran complex (BH3-THF).

Borane is preferred to LiAlH4 due to its selectivity. BH3-THF can selectively reduce carboxylic acid in the presence of both ketones and aldehydes, whereas LiAlH4 non-selectively reduces all carbonyl groups.

Mechanism for alkylation of carboxylic acids to form ketones:


Organolithium compounds, like Grignard reagents, contain a carbanion (R-) that both deprotonates the carboxylic acid and also undergoes a nucleophilic addition to the lithium carboxylate to form the dianion.