Top Hat Intro Course - Organic Chemistry I & II is designed for instructors who want an active, dynamic, and understandable approach to support their own efforts in the classroom. This ever-evolving textbook includes auto-graded questions, videos and approachable language in order to make difficult concepts easier to understand and implement.

Chapter 8: SN1 Reactions and Distinguishing the Differences Between SN1 and SN2 Reactions

8.0 Introduction to SN1 Reactions
8.1 Substitution Nucleophilic Unimolecular (SN1)
8.1.1 Stereochemistry of an SN1 reaction
8.2 Factors that Affect the Rate of the SN1 Reaction
8.2.1 Introduction
8.2.2 Leaving Group
Keeping it Real
8.2.3 Solvent Effects
8.2.4 How do you Relate Thermodynamic Stability with a Kinetic Rate?
8.2.5 Solvolysis Reactions: The Solvent as the Nucleophile
8.2.6 Mixed Solvent Reactions
8.2.7 The Influence of Solvents on the Stereochemistry of the Products
8.3 Effect of Structure on the Rate of Reaction
8.3.1 Electronic Effects
8.3.2 Reactivity of Allylic, Benzylic, Vinyl, and Aryl Alkyl Halides
8.3.3 Carbocation Rearrangement
8.4 How to Determine if a Reaction will Undergo an SN1 or an SN2 Mechanism (Hammond-Leffler
Postulate)
8.4.1 Step-by-Step Procedure for solving SN1and SN2 reactions
8.5 Chapter Summary

In chapter 7: SN2 Reactions with Alkyl Halides, we studied the SN2 reaction and the effect nucleophilicity, the structure of the electrophile, and solvents have on the rate of an SN2 reaction. In this chapter you will apply this knowledge to a mechanistically different substitution reaction, the SN1 reaction.

Substitution Reaction: A reaction in which an atom or a group of atoms is replaced by another atom or group of atoms. In the above example, the nucleophile (Nuc) replaces the leaving group (LG).

Leaving group: Leaving group must be able to leave as a relatively stable (i.e. non-reactive), weakly basic molecule or ion.

Definition: It is a nucleophilic substitution reaction in which the rate of reaction is dependent only on the concentration of the electrophile. The reaction rate is first order as shown by its rate equation:

where k is equal to the rate constant.

The overall SN1 reaction occurs through a series of steps. During the course of these steps, intermediates are formed and the rate of reaction is determined by the slowest step. The slow step is called the rate-limiting step or the rate-determining step.

Make sure you understand the Potential Energy Reaction Coordinate diagram and how energy relates to reaction rates in the animation.

What did the video show us?

8.1.1 Stereochemistry of an SN1 reaction

The nucleophile can only donate electrons to an empty orbital of the electrophile, since the filled orbital already has two electrons and cannot accept more. Thus, it is the empty p orbital that accepts the electrons from the nucleophile. Since the p orbital is on either side of the plane of the alkyl groups, the nucleophilic attack can occur from either face of the carbocation to form an equal mixture of enantiomers. Pathway A shows the nucleophilic attack from the top face of the drawing and pathway B shows it from the bottom face. Since each pathway has an equal probability of occurring, this step will produce an equal (50:50) mixture of R and S enantiomers, as shown in Figure 8.4.

The carbocation intermediate is achiral

Which of the following is the rate law for the given SN​1 reaction? 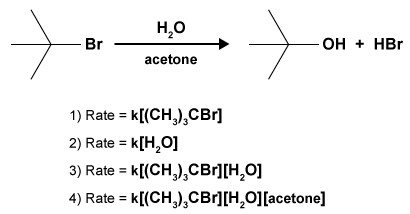 What are the major substitution products formed in the following reaction? 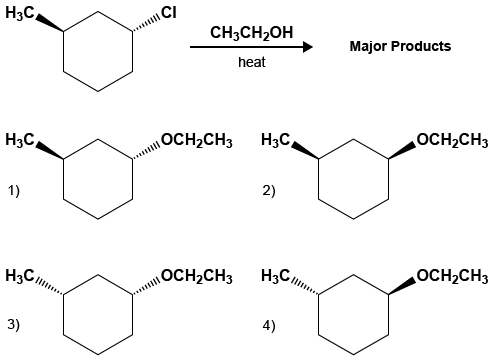 Two substitution products are formed in the following reaction. What relationship do they have with each other?

Two substitution products are formed in the following reaction. What relationship do they have with each other?

Only one compound is produced

The given compounds were heated in methanol and the resultant SN​1 products were determined. Match the products with their observed stereochemistry. 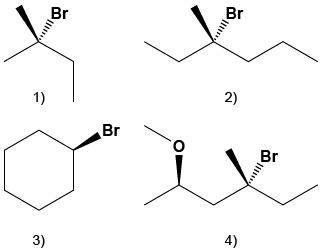 8.2 Factors that Affect the Rate of the SN1 Reaction

The rate determining step is endothermic, and in the transition state, the C-L σ bond lengthens and weakens (the C-Cl bond in Figure 8.6). The leaving group gains electrons from the σ bond and becomes negatively charged relative to its charge as a reactant. The carbon loses electrons from the σ bond and becomes positively charged. The key factor to this mechanism is the formation of the unstable intermediate. Thus, anything that helps stabilize the transition state and intermediates will increase the rate of an SN1 reaction by decreasing the activation energy of the rate-determining step.

The factors that affect the rate of an SN1 reaction are as follows:

Structure of Electrophile: Since the rate-determining step involves the formation of a carbocation, electron-donating groups help stabilize the forming carbocation and decrease the activation energy.

Solvents: Since the rate-determine step involves the formation of ions, protic solvents have a large effect on the rate of reaction due to solvation energies.

In the transition state, the leaving group gain electrons and becomes negatively charged relative to its charge in the reactant. Therefore, good leaving groups are those that form stable ions or molecules after they depart. This was discussed in the SN2 module and only the tables are presented here.

Order the following compounds from most reactive to least reactive in an SN​1 reaction.

Watch the following video to see the explanation to Q8.7.

Which of the following alkyl halides would react the slowest when heated in an aqueous solution of acetone? 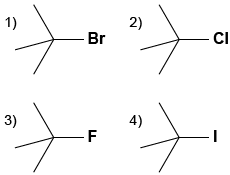 SN1 Substitution in the Biosynthesis of Terpenoids


Terpenes are the largest class of natural products (organic compounds synthesized by Mother Nature) and are comprised of more than 30,000 compounds from all kingdoms of life.

You may not have learned the lingo ‘terpene’ before, but you’ve probably heard of some famous terpene natural products like menthol, retinal (in vitamin A), and taxol.

Step 3: The resulting carbocation is ultimately converted to geranyl pyrophosphate, which Nature can further utilize.

“Step 2” involving carbocation formation and a nucleophile attack, is reminiscent of an SN1 reaction.

Nature uses the product from the sequence shown above, geranyl pyrophosphate, to make larger terpenes.

This terpene can cyclize to form lanosterol, which is a precursor to cholesterol and all steroids in animals. Cholesterol is important for cell membrane permeability and also for the synthesis of vitamin D in our skin.

Click here for more information about the biosynthesis of terpenes.

Cholesterol in the movies

The famous terpene cholesterol comes up often on TV and the movies! For example, in the 2004 documentary film "Super Size Me", Morgan Spurlock eats McDonald’s food for 30 consecutive days. His cholesterol levels increased from 169 to 225 mg/dL. He also gained more than 24 pounds, while experiencing mood swings and sexual dysfunction. It took him 14 months to return to his normal weight.

The intermediates that are formed in the SN1 reaction are a carbocation plus a leaving group that is either negatively charged or neutral. Thus, the polar protic solvents would be expected to help stabilize the transition state and the intermediates by lowering the activation energy.​​

Below is a list of solvents and their relative rates of ionization of tert-butyl chloride. Given also is the dielectric constant (ε) which is a measure of a substance's ability to insulate charges from each other. This value can also be used to interpret a solvent's polarity; the higher ε means higher polarity and greater ability to stabilize charges.

Notice that the rate of ionization of tert-butyl chloride is greater for more polar protic solvents.

Which of the following solvolysis reactions would you expect to have the fastest rate of reaction?

8.2.4 How do you Relate Thermodynamic Stability with a Kinetic Rate?

8.2.5 Solvolysis Reactions: The Solvent as the Nucleophile

8.2.7 The Influence of Solvents on the Stereochemistry of the Products

If a contact ion-pair forms, the rate of reaction would be slower from the face from which the leaving group left. Thus we would expect to see a greater percentage of the product with inversion of the chiral carbon and a lower percentage of the product with retention of the chiral carbon. This is indeed what we see in some reactions. In the example below, an enantiomeric excess (ee) of the (S)-1-phenylethanol is formed. That is, more product is formed from the nucleophilic attack on the opposite side of the leaving group (inversion of stereocenter) than is formed from the side that the leaving group was on (retention of stereocenter). If this occurs, the products will not form a racemic mixture and the solution would be optically active. For an explanation of enantiomer excess, review the stereochemistry module, Chapter 6.3.6.

8.3 Effect of Structure on the Rate of Reaction

This can be explained by electron donation of the adjacent C-C or C-H σ bonds into the empty carbocation’s p orbital. Alkyl groups donate electron density inductively through σ bond conjugation or hyperconjugation.

Increasing the number of alkyl groups attached to the carbocation increases the stability of the cation. This suggests that, in SN1 conditions, only secondary and tertiary carbocations will form.

Which of the following alkyl halides would be most reactive in a unimolecular reaction? 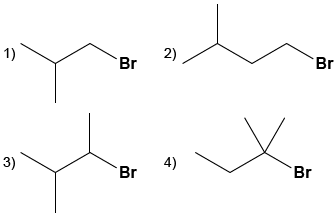 Sort the alkyl halides from fastest to slowest in a SN​1 reaction.

Both allylic and benzylic alkyl halides are very reactive in SN1 conditions. They are more reactive than tertiary alkyl halides. This is because resonance stabilization of the carbocation intermediate spreads the charge onto different atoms.

Vinyl and aryl alkyl halides do not react under normal SN1 conditions because the positive charge is not resonance stabilized by the π bond.

Watch the following video to see the explanation to Q8.12.

Sort the alkyl halides from fastest to slowest in a SN​1 reaction. 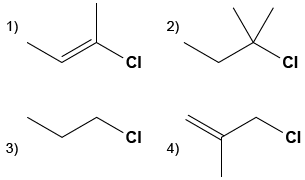 Any time a carbocation is formed, a rearrangement can occur to form a more stable carbocation. A hydrogen, methyl, or whole alkyl group can move. Shown below are methyl and hydride migrations.

The group that migrates must be involved in hyperconjugation prior to the shift or β to the carbocation.

Alkyl groups can also rearrange. For example, the cyclobutane ring rearranges to form the more stable cyclopentane ring in the following SN1 reaction.

Would the following carbocation undergo a hydride shift or a methyl shift?

Watch the following video to see the explanation to Q8.15.

Identify the major substitution product(s) formed in the following reaction. 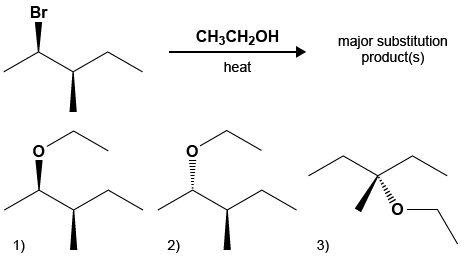 Which of the following compounds is most likely to undergo rearrangement in a solvolysis reaction?

What are the products produced in the given solvolysis reaction? 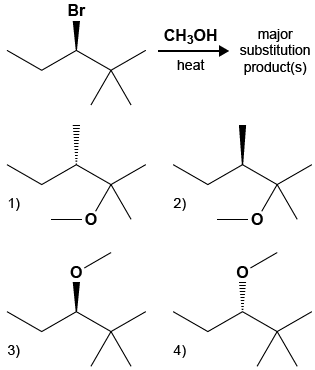 All of the substitution products will be produced equally

Sort the following carbocations from most stable to least stable.