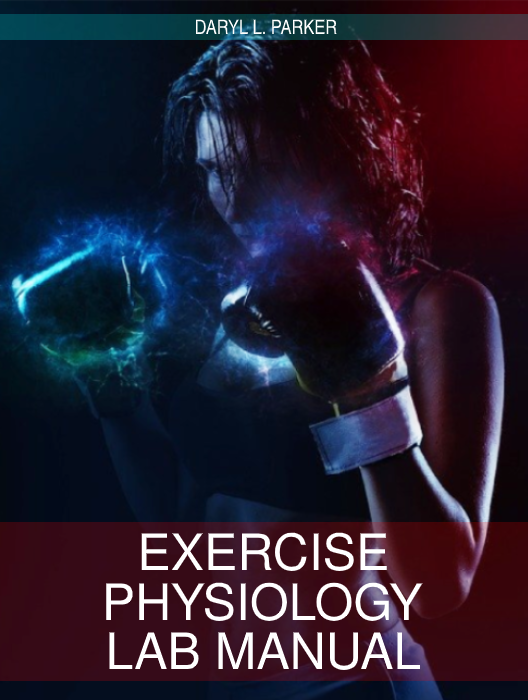 Eleven exercise physiology lab experiments or demonstrations with assessment questions and problem solving exercises. Each chapter has introductory reading and recommended reading that include step by step procedures for the chapter. Data collections sheets are also included in each chapter.

Body composition analysis has several functions in relation to exercise physiology. Body composition analysis can be used for the determination of nutritional status, health, fitness, weight management goals, and other areas where body weight may not always reflect actual changes to the body.  The human body has a number of component tissues that include but are not limited to:

This list although not comprehensive does convey the complexities of human body composition.  Unfortunately most body composition techniques only separate the body into two components, the fat mass (FM) and the fat free mass (FFM).  The FM is the mass of the adipose tissue and the FFM is the mass of the remaining non-adipose tissues.  The density of these two components has been determined through cadaver analysis.  The measurement of density (densitometry) has been used to assess body composition based on the assumption that the densities of the two are:

The density of the FM is relatively well established, but there is considerable variability in the density of the FFM.  The FFM can vary with age, ethnicity, fitness, and disease state and therefore introduces a relative error in the the assessment of body composition.  There have been attempts to correct for this error by using equations specific to the populations above.  For the purposes of this lab the traditional assumptions and equations will be used, however for clinical or research work, population specific equations should be utilized (see recommended reading).

Hydrostatic weighing has long been considered the gold standard for body composition assessment.  The measurement of underwater body weight is used to determine body volume based on the Archimedes Principle.  Archimedes had observed that when an object was submersed underwater that its mass (weight) would decrease.  He further observed that the decrease in weight was proportional to the volume of the object and realized that volume of an object could be determined by the loss in weight of the submersed object.  Since the human body is not a simple sphere or cube, body volume must be determined by the Archimedes Principle.   Once body volume is measured total body density can be determined using body weight for mass(D=M/V). Following the measurement of body density %body fat can be estimated using a conversion equation based on the assumed densities above.

While the hydrostatic weighing procedure is a relatively easy process to understand, it is complicated by two factors.  First, the residual volume (RV)of the lung needs to be taken into consideration since it can alter weight displacement independent of the volume of the body.  To correct for the residual volume, it first needs to be measured, which is not an easy task since this volume of air never exits the lung.  In order to assess RV an inert gas dilution is required (Nitrogen Washout and Helium Dilution are the most popular) (See Figure 1.1) where the subject breathes a mixture of one of these gases and the change in

the concentration of these gases is proportional to the RV (See figure 1.2).  This is again a simple procedure to understand, but expensive to assess.  The gas analyzing system (See Figure 1.3) and the sterilization of the breathing apparatus can have substantial cost and space requirements.  It should be noted that the RV can be estimated from equations based on age and height, but are not as accurate as the use of gas dilution and thus can contribute to the errors in body composition

assessment.  The second complication relates back to conversion of density to percent body fat.  The conversion is based on the assumed densities of the FFM and FM noted above.  The cadavers used to determine these densities where not diverse in terms of their age, ethnicity, or fitness and thus limit the accuracy of the estimation of percent body fat from underwater weighing.  Assuming that the proper procedure has been followed including the assessment of RV, the accuracy of the hydrostatic weighing procedure are +/- 2% .

More recently devices such as the dual energy x-ray absorptiometry (DEXA) have been gaining ground as the gold standard. DEXA is a method

that uses an x-ray beam to scan the body, from which adiposity can be determined.  DEXA has the added advantage of allowing for segmental analysis such the adiposity of the limbs or abdominal areas.   In addition multi-component models that further sub-divide the components of the fat free mass (FFM) have shown improved accuracy in determining body composition.  However, this comes at the cost of increased complexity of measurement and thus are likely only for use in research.

While hydrostatic weighing is the gold standard for body composition determination, the equipment for this procedure can be expensive, bulky, and not very time efficient and thus only suitable as a laboratory method for determining body composition. For this reason field methods have been developed that will give reasonably good accuracy for a minimal amount of time and minimal cost. The most popular of these methods is the skinfold assessment. Skinfold assessment involves measuring skinfold thickness in millimeters with a caliper (See figure 1.1). This assessment is based on the assumption that 33% of the total body fat is deposited under the skin. Once the sites are measured they are summed and put into a regression equation and body density is estimate. The estimated body density is then converted to % fat using the same equations as in hydrostatic weighing.

Given that BMI is a ratio of height to weight, it is probably not a very good predictor of %fat.  This can be noted in large athletes that tend to have large body weights for their heights, yet very low %fat.  It is curious then that this variable is often cited in research when it is such a poor assessment of body composition.  The BMI is often used because is a good predictor of health risk.  In other words, is it more or less likely someone will have a problem with their health, independent of their body fat.  Those with elevated BMI are more likely to develop heart disease, cancer, diabetes, joint problems, etc., as opposed to those with lower BMI.

The normal values for %body fat are difficult to assess.  What is considered low or high %body fat is partially determined by the population, the age, and the setting that the person is in.  For example, is this a diseased or healthy population?  Are they male or female? Is this a young or elderly population?  Is this a hospital or an Olympic sports center?  This means that the determination of low and high fat to some degree is determined by the interpretation of the professional taking the measurements.  A good place to start is health considerations.  The opinion on a health range of %fat can vary, but most consider the following to be a health range:

It should be noted that these are fairly wide ranges that are considered to" healthy", this is an important distinction between health and ascetics. Many may be in the upper range and consider themselves and consider themselves unhealthy because they do not like they way they look, but adverse health conditions secondary to adiposity do not begin until a person is outside of this range.  The width of the range should also convey the lack of sensitivity that body fat has in assessing health, and thus is the reason for the use of BMI as a risk predictor.  The normal ranges and risk associated with BMI are:

*It is important to note that being underweight is as high a health risk as being overweight.

The determination of body composition through either lab or field methods in combination with an assessment of BMI is valuable in determining health risk.  The two should be used together rather than thought of as separate in helping people to assess their body composition.

The purpose of conducting this lab exercise is to determine body composition for each person in class and demonstrate the hydrostatic weighing technique.  In addition the results of this lab assignment will be used to determine the energy reserve stored in our fat mass.

1)      Fast for at least four hours prior to this lab.  Avoid foods that are gas producing such as beans, pastas, vegetables and beer, as well as chewing gum for at least 12 hours prior.

3)      Measure body weight dry prior to getting into the tank.  Be sure to record body weight after measurement.

5)      Be sure to record the tare weight and water temperature prior to getting into the tank.

8)      Lower head into the water until completely submerged and expire any extra air that is possible.

11)  After the three measurements have been taken, exit the tank and dry off.

Mid-Axillary = Vertical fold mid-way between the anterior and posterior axillary line, at the level of the xiphoid process.

Subscapula = Taken at the inferior angle of the scapula parallel to the vertebral border.

Tricep = A vertical fold taken mid-point between the acromion and olecranon processes.

Suprailliac = Taken just superior to the illiac crest at a 45° angle.

Abdomen = A vertical fold 2 cm lateral to the umbilicus.

Thigh = A vertical fold taken mid-point between the inguinal crease and the superior surface of the patella.

2)      Once the site has been identified, pinch the site with an inverted hand and pull the skinfold away from the muscle.  Place the skinfold caliper on the skinfold and wait 4 seconds to read the caliper.  Record the value.

Which of the following are components of the FFM

How would you describe the risk level for a male that stands 180cm, weighs 90 Kg and is 18% body fat?

Which of the following are a purpose of determining body composition? Mark all that apply

The hydrostatic weighing procedure is used to determine _.

Hydrostatic weighing is based on what principle?

Using the density from the above answer convert to percent body fat using the Siri equation:

Based on the %Body Fat above determine the FM in Kg

Figure 1.4 Provided by Jks111 through wikimedia commons under CCBY-SA3.0;