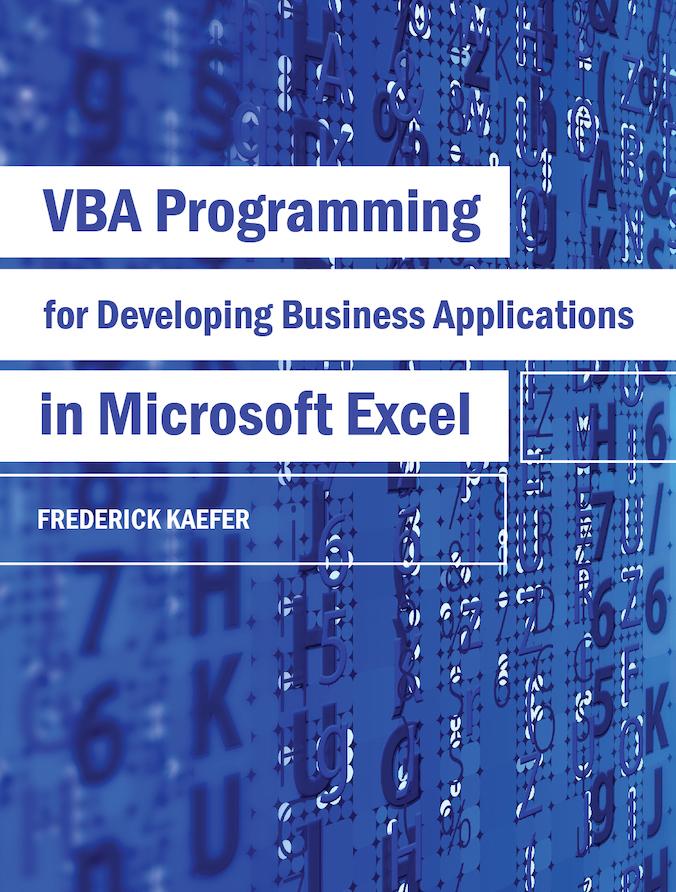 Includes illustrations and videos to explain how the VBA programming language can be used to create applications building on the features of Microsoft Excel.

Benefits of Learning to Create Applications with VBA

Visual Basic for Applications (VBA) can be used to create computer-based applications that utilize and build on the features of Microsoft Excel.  Benefits of learning to create applications with VBA are numerous.  One clear benefit is gaining a deeper understanding of the inner workings of Microsoft Excel.  Becoming an expert in Microsoft Excel is highly valued in today’s workplace.  A second benefit is learning how to code.  Developing coding skills has been recognized as being important for opening many opportunities, both entrepreneurial and traditional in nature.  Since Microsoft Excel is widely used in the business world, developing coding skills in VBA is particularly useful.  It has been found that half of all programming openings are in industries outside of technology and that the highest demand is for programming languages with broad applicability1.

Experienced users of Microsoft Excel are familiar with numerous features within Excel that are used for working with and analyzing data, including Pivot Tables, Data Tables and the creation of Scenarios using the Scenario Manager.  Figure 1.2 illustrates a UserForm that is used when creating a Pivot Table in Excel.  In addition to these features that are built into Excel, Add-In programs can also be used.  One example is the Data Analysis Toolpack, which enables users to create histograms, conduct regression analysis and perform hypothesis testing.

​Each of these applications involve user interfaces that facilitate the specification by the user of actions they would like to have completed.  These interfaces often contain controls including entries presented in list boxes for the user to select, and check boxes and option buttons that the user can utilize to indicate specific conditions and choices.  Once indicated, the applications perform processes that involve various calculations and manipulation of various data elements.  The data used is typically stored data, either within an Excel workbook or from an external data source such as a file or database.  In the successful use of one of these applications, the user is presented with results, typically in the form of a table or chart, which is used to support decision making.

Visual Basic for Applications (VBA) is a computer programming language that comes with Microsoft Office Software.  VBA can be utilized to automate many actions within Microsoft Office Programs, but also to develop applications which are user-friendly and can add value in business settings.  These applications can guide users through the steps that they need to perform, reducing data entry errors and performing complex tasks such as retrieving and updating data from shared databases.  The following video demonstrates an example application that enables users to utilize stored data to support decisions through the manipulation and analysis of that data. By the end of this textbook, you will be able to create applications of your choosing that use features like those demonstrated here.

To write code in VBA within Microsoft Excel files, a developer needs to utilize the Visual Basic Editor (VBE).  The VBE is an Interactive Development Environment (IDE) which contains facilities for writing and editing code as well as testing and debugging code.  The VBE also has resources for working with the objects used to create UserForms.  UserFoms are customized interfaces that can contain a number of controls for the user to make selections or indicate which actions they would like to occur.  In Microsoft Excel, the VBE can be accessed through the developer tab on the ribbon (Note that the developer tab may have to be added to the ribbon if it has not configured to be there by default), or by using the shortcut key combination ALT + F11 on windows – based systems.  The following video demonstrates how to activate the VBE and illustrates the main features of the VBE.

A (n) ___ is a customized interface that can contain a number of controls to make selections or indicate actions to occur.

​In addition to properties and methods, many objects in Excel have events that are associated with them.  Events are things that occur or happen to an object.  For example, Figure 1.3 illustrates a portion of the object browser and the members of the worksheet object.  The first member in the list of worksheet objects is the Activate event.  This event occurs when a worksheet is made active, such as when clicking on the worksheet tab within Excel.  The lightning bolt icon is used to indicate that this first member is an event.    The second member is the Activate method, which causes a given worksheet to become the active worksheet.  The next several members are properties, specifically Application, AutoFilter and AutoFilterMode.  In the following chapters we will work with a number of Excel objects and utilize a variety of their properties, methods and events.

Methods of an object are:

attributes of that object

things that occur or happen to that object

actions that can be done to or with that object

all of the above

VBA code may be developed to work with any of the objects in Excel, and throughout our coverage we will see examples of code that is associated with workbooks, worksheets, and UserForms.  In addition to being specifically associated with particular objects, VBA code is often written within modules.  Wherever the code is developed, VBA code is organized within subroutines so that code can be referenced and executed.  The following program illustrates a number of features related to the structure and format of a VBA program.

​Several basic elements of VBA code are comments, reserved words, variables, and lines of code, which are illustrated in Figure 1.4.  Comments always begin with a single quote “ ‘ “, and can be on their own line or at the end of a line of code.  Comments are shown in green font and are not evaluated by the compiler when the code is executed.  Reserved words are shown in blue font and are often expected to follow specific conventions.  For example, in the code above, the word “Sub” is a reserved word.  It is required that lines of code are placed within a sub, so the sub reserved word is expected to be encountered prior to any lines of code by the compiler when the code is executed.  If a line of code were encountered before the sub keyword was encountered, an error would result.  Variables are used to reference locations in memory where intermediate results are often stored and manipulated.  Variable names are shown in black font, and it is deemed a best practice for developers to formally declare variables used in their code by specifying the name and data type of the variable.  We will discuss variable data types in more depth in the following chapters.  Lines of code are also shown in black font, unless there is a syntax error, in which case the syntax error will be identified by rendering the code in a red font.  There will be more coverage on error types and how to resolve them in the following chapters as well.

Which of the following always begin with a single quote in VBA code?

Which of the following are shown in blue font in VBA code?

none of the above

Which of the following are shown in green font in VBA code?

Frederick Kaefer is an Associate Professor of Information Systems in the Loyola University Chicago Quinlan School of Business.  After completing a Bachelor’s degree in Mathematics and Computer Science, he worked as a mainframe programmer for several years before earning an MBA with concentrations in Finance and Information Systems and a PhD in Management Information Systems.  Professor Kaefer has taught computer programming to business students for over 25 years.  In addition to teaching courses involving learning programming and developing applications using Visual Basic for Applications, Professor Kaefer is also developing a course using the Python programming language.

In addition to teaching computer programming related courses, Professor Kaefer has taught a wide variety of courses including Business Statistics, Business Information Systems, Network Management, Systems Analysis and Design, and Telecommunications for Managers.  Professor Kaefer has also been honored by the Quinlan School of Business as the Outstanding Graduate School of Business Faculty Member of the Year.