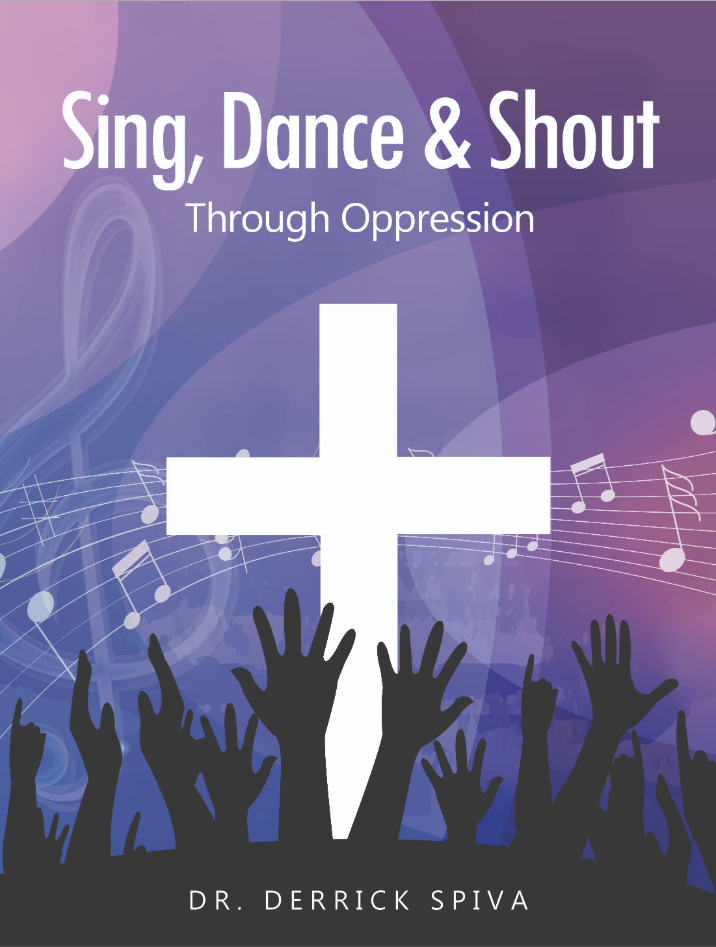 Who am I? You can review my San Francisco State University Profile by Clicking Here

Over the course of centuries, African-Americans have developed theologies and religious practices that respond to the “big” questions of life: what is the nature of existence? Who am I? Why am I here? What sense can be made of collective pain and suffering? And so on. These religious practices and there supporting spiritual traditions come in a variety of forms and respond to the needs of particular segments of the overall African-American population. Spirituals and later Gospel music has played a significant role in the over all religious experience of many African Americans.

"Black music is unity music. It unites the joy,  sorrow, the love  the hate, the hope and the despair of black people.  It moves the people toward the direction of total liberation. It shapes and defines black being and creates cultural structures for black expression. Black music is unifying because it confronts the individual with the truth of black existence and affirms that black being is possible only in a communal context."

Among the wealthiest of the rich blessings, Africa has given to the world is rhythm, the beat. It’s the sound of drums, it's the  vibration of wood on wood, and of hand close by.  That indefinable heartbeat that cuts through the noise of oppression, sets blood to dashing and toes to tapping inspiring a people.

It is rhythm that drives the love affair people have with gospel, blues, soul, jazz, shake and roll music.  It all begins with the ancient tribal music. Rich in diversity different regions and nations of Africa having many distinct musical traditions.  Much to vast, varied and complex to detail in this course. So we will begin with the spirituals.  A mix of spirituality, rhythm, religious tradition and communication with a rich dose of heart, soul and spirit.

Through this text, we will attempt to show the ever changing evolution of a musical expression where once the genre was established, it changes once again.  In chronicled terms, spirituals rose out of African cadence, work tunes, and field calls in a very short time.  Possibly in the days the first  African slaves arrived on American shores in 1619.  From the spirituals, sprang their otherworldly beneficiary celebration, as well as jazz, blues and soul. Gospel music in its current structures transformed from the spirituals, soul, celebration, and obviously African cadence.

Still, why trouble with antiquated history? Why think about this soundtrack from the darkest time of American history? Why consider a kind of music that now represents under 10% of all recorded music? Why invest in a chronology of spirituals and gospel music at all? What do they matter?

"Those who do not remember the past are condemned to repeat it."         -George Santayana
"We are not makers of history. We are made by history. "
-Martin Luther King, Jr.
"History, despite its wrenching pain, cannot be unlived, but if faced with courage, need not be lived again."
-Maya Angelou

Spirituals are an uncensored, unedited glimpse into the hearts, minds and lives of slaves especially for those living years after slavery, but not that long after the end of the equally heinous Jim Crow laws.  Only in the spirituals were those in trapped by slavery  given the flexibility to dream his (and her) fantasies.  For some it was the hope, vision and communication of eventual freedom.

Slaves articulated their misery and forecasted their triumphs. They likewise promoted the gathering of insight and communicated the illogical existence of slavery. The Spirituals taken in general contain a record and a disclosure of the more profound considerations and encounters of the Negro in this nation for a period starting three hundred years back and covering over two centuries. If you wish to discover their secrets, you will find them in spirituals more so than in any facts, figures and pages of history.

John Wesley (known as the father of the Methodist tradition) once called the slavery and indentured servitude "the most contemptible that ever saw the sun," however noticed that bondage did not destroy a people. Truth be told, John Lovell, Jr., contends that it gave the driving force to unparalleled hope and a unique idyllic expression.

What's more, they did it under the very noses and in the most oppressive "Big Houses" of their Slave owners.

We just have a very sketchy idea of what most spirituals really implied.  In an area where reading and writing for slaves was illegal and even the most innocent attempt at literacy was punishable by death, slaves built up an unprecedented coded dialect.  A dialect so rich with significance and complexity that many lyrics are difficult to interpret even today.  Slaves utilized the spirituals to pass on religious truth as well as data imperative for survival and escape in spite of the savage persecution of their captives.

W. E. Du Bois saw spirituals as heartfelt expressions of human emotion and reminders of the strength and resilience of the human spirit under extremely hostile circumstances. Slavery reduced individuals to chattel, subjected them to harsh working conditions while separated families. Enslaved black people used spirituals to go beyond the physical world, forging a spiritual universe distinct from this physical world.  In the process black people used music to give meaning to their horrific circumstances.  As slaves, African Americans were regarded as non human inferiors. Yet the songs gave them hope as they considered themselves to be “God's chosen people”.  This hope was gained from the example in the Hebrew bibles account of the Jewish people suffering as slaves but eventually gaining freedom.

Gospel music by definition means “good news”.  Gospel music is the primary vehicle for which spirituality and tradition have been handed down from generation to generation in the black church. It has also inspired audiences all over the world.

Gospel music with its unique mix of cultures has played an important role in American race relations yesterday, today and for the foreseeable future. Black gospel music is and was a synthesis of African-based musical idioms, traditional European Christian hymns, and came to maturity during slavery.  Southern gospel, conversely, came to grasp a portion of the beats and rhythms  of the black gospel style.  Gospel music focuses on the spiritual instead of the secular aspects of love, and contributed to greater understanding and respect between the races particularly during the Civil Rights movement.  Many millions of people around the world have been inspired by Gospel music.  It has comforted those in times of trouble, tragic circumstances. It has guided lives thorough its inspirational message, and for some directly fulfilled a personal search for God.

In recent history, at the center of the gospel music tradition is the use of a choir. The church or community choir.  Choir members can easily be distinguished from the rest of the congregation because they traditionally dressed in robes. The gospel choir music is usually arranged  in a call-and-response format.

The traditional structure and format of gospel music most notably changed in the late 1930s when Thomas A. Dorsey and Willie May Ford Smith began composing, distributing and teaching gospel music in their workshops.  Dorsey was a former jazz/blues pianist and composer who had worked with famous jazz and blues musicians.  Dorsey created a new style of gospel music called gospel blues, which transformed his style of blues and jazz with a new gospel music sound.

The Gospel music form continued to develop and transform throughout the late 1930s. There are four distinct styles of gospel music including but not limited to, quartet style, traditional gospel, contemporary gospel, and praise and worship. The gospel quartet style consists of  a small number of male or female vocalists singing music together with well organized or "tight" harmonies.

The major difference between traditional and contemporary gospel styles.

Gospel music emerged from a group of small churches on the fringes of black religious life to became the most popular form of sacred music in the country along with great commercial success. With these developments came new challenges and new possibilities. As an African American religious music that enjoyed great commercial acclaim, gospel came to inhabit multiple worlds, serving as a coming together point for sacred and secular concerns and for local black communities, civil rights events as well as mainstream popular culture. As a result, gospel became a critical arena in which African Americans contemplated questions about the nature of faith, spirituality and the shape and meaning of racial identity.

• Why gospel music has been such an important part of our modern society?

• Is there a scientific connection to the passion, emotion and jubilance gospel music evokes in so many?

• What can a deeper understanding of African American culture teach us about gospel music and it’s influence on today’s diverse society? What is the connection?

• We will discuss gospel’s African roots.

• We will explore the business of gospel music. There has been a significant influence the music industry has had on Gospel music and by vice versa.

• The American Civil War and Reconstruction had a profound influence on Gospel music. With the advent of the Historical Black Colleges (HBCUs) especially the Fisk Jubilee singers, came changes that popularized the genre of music as it exposed mainstream society to its rhythms and passion for life, spirituality and freedom.

• As the periods of “Great Awakening” influenced religion, gospel found it’s foundation and rose to be the sound track of civil rights movement and evolved to produce some of the worlds most celebrated artists and entertainers known the world over.

• The changes have been profound and although there are too many outstanding artists to mention, we will discuss the contributions of some who’s contributions not only impacted gospel music, the music industry as a whole, but the world.

An important part of black expression

It's an important part of American History

It's an Important part of African history

How to Understand American Music

Acording to the text, "to Truly understand American music, one must what??

Go to a good music school

first attempt to understand the spirituals and gospel music

Listen to a variety of music

The “Big” Questions of Life

History and development of African American’s religious theologies focusing on those religious practices that respond to the “big” questions of life: What are they

What is appropriate dress for church

The pillars of doctrine

What is the nature of existence? Who am I? Why am I here?

What sense can be made of collective pain and suffering? And so on.

What should we attend church?