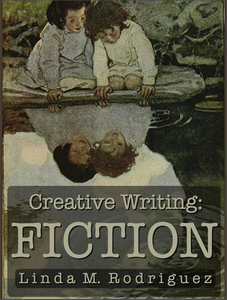 This book will help develop writing skills, and enhance knowledge of authors, genres, trends, and innovations in contemporary fiction.

About the Author of This Virtual Book

My name is Linda María Rodríguez Guglielmoni. I am a poet, short story writer, and aspiring screenwriter. I am a member of the English Department at the University of Puerto Rico-Mayagüez. I divide my mornings between writing and walking to the shore of the Caribbean Sea with my dog, Captain Morgan.

I was born in San Juan, Puerto Rico and grew up in Ponce, a city steeped in Caribbean and Spanish colonial traditions on the island's southern coast. Also, I spent part of my childhood in London, England where my mother was born and where her parents and other family lived.

I was an undergraduate student at Georgetown University where I majored in British Literature, worked for the Department of Art and Art History, and wrote theater reviews for the student newspaper, The Hoya.

I completed graduate degrees at The University of Michigan-Ann Arbor with two major research projects:

Since 2002 I have regularly attended artist's residencies, such as Voices of Our Nation Arts Foundation (VONA) in San Francisco, Norton Island Residency for Writers and Artists in Maine, and the Atlantic Center for the Arts in Florida. Recently I completed UCLA's Professional Screenwriting Program and Sundance Film Institute's Collab inaugural 12 Week Intensive Screenwriting Course, Fiction Directing Course: Core Elements, and Screenwriting: Horror/Psychological Thriller.

This book brings together my experiences as a professor at the University of Puerto Rico-Mayagüez, and my experiences as a writer who has had the honor of working with acclaimed writers and performers, such as: Elmaz Abinader, Cornelius Eady, Tony Hoagland, Matt Madden, Dael Orlandersmith, Willie Perdomo, Ishmael Reed, and Heather Woodbury. My hope is that in the pages that follow I have been able to instill some of the wisdom about the process of writing I have learned from these master artists.

Above all, my hope is that the exercises in this book will take you on a journey of self-discovery that will inspire you to write stories that surprise you!

More information about me at the University of Puerto Rico-Mayagüez, English Department blog and at Esta Vida Boricua.