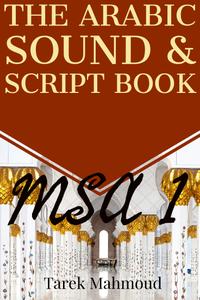 This text is designed to introduce the Arabic language Sound and Script, basic words and phrases, and some cultural notes to learners.

The Arabic Sound & Script Book, Modern Standard Arabic 1 (MSA1) is designed to introduce the Arabic language Sound and Script, basic words and phrases, and some cultural notes to learners. The Arabic Script is introduced letter by letter and the sound is introduced through audio files.

The Arabic language is classified as a Semitic language; other Semitic languages include Hebrew and the Neo-Aramaic languages. Spoken Arabic varieties have more speakers than any other language in the Semitic language family. Arabic is spoken in 58 countries and it is the official language in 22 countries. Arabic has many different, geographically distributed, spoken varieties (dialects). Modern Standard Arabic (also called Literary Arabic) is widely taught in schools, universities, and used in workplaces, government and the media. The Arabic Sound & Script Book (MSA1) is presenting the Modern Standard Arabic (MSA) Sound and Script, which is the foundation of all Arabic dialects.

There is a myth that Arabic is a very difficult language for non native speakers / non Arabic speakers to learn, specifically adult learners. I would like to stress on the fact that Arabic is not difficult but different from any other language.

-          The Arabic Alphabet has twenty-eight letters + One phenom, while English has twenty-six letters.

-          Based on the position of the Arabic letter in a word, it takes a slightly different shape in writing if the letter is at the beginning, middle or at the end of the word or standing alone.

-          English writing system has two styles of writing, either printing or cursive, but Arabic script has one writing style that is almost similar to the English cursive script.

-          Some Arabic letters do not connect with other letters in the same word (one-way connectors), while in English cursive writing all letters are connected in the same word.

-          The Arabic sounds use a wider range of mouth and throat positions than English.

-          Arabic has a one-to-one correspondence between sound and letter.

-          In Arabic writing, words are generally written as they are pronounced, i.e. regularly phonetic.

-          All consonants sounds are represented in writing by letters.

-          In pronunciation, there are nine sounds in Arabic that do not exist in English.

- Recognize and read some of the Arabic scripts.

- Recognize the Arabic names of some cities and countries.

- Introduce oneself to others.

- Giving thanks and saying greetings.

- Understand some aspects of the Arabic cultural related to the chapters’ topics.

- Understand some of the unique Modern Standard Arabic grammar rules.