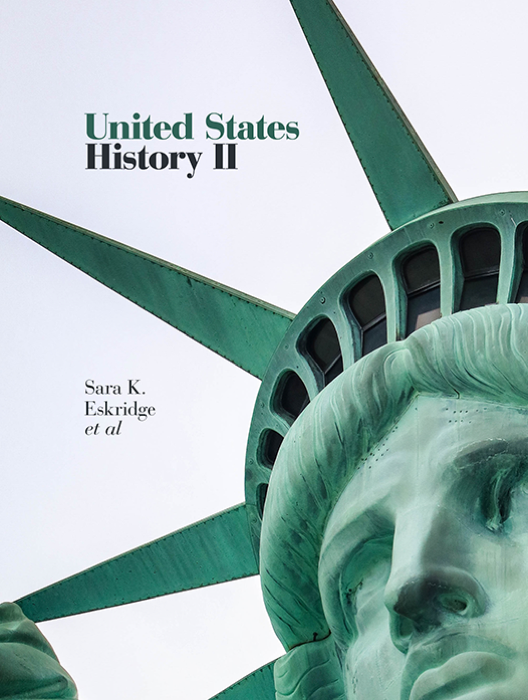 Consider adding Top Hat’s U.S. History textbook to your upcoming course. We’ve put together a textbook comparison to make it easy for you in your upcoming evaluation.

Dr. Eskridge is a Professor of History at Western Governors University. She specializes in Civil Rights, Cold War, Southern, and Cultural History. She is the author of Rube Tube: CBS as Rural Comedy in the Sixties (University of Missouri Press, 2019) as well as several articles and book chapters on southern mediated images during the Civil Rights Movement and the Cold War.

Michael FrawleyUniversity of Texas of the Permian Basin

Dr. Eskridge is an Adjunct Assistant Professor of History at Randolph-Macon College, where she teaches courses on 20th century U.S. History. She specializes in Civil Rights, Cold War, Southern, and Cultural History.

​Andrew N. Wegmann is an Assistant Professor of History at Delta State University, and author of essays on race, identity, and politics as well as the forthcoming bookSkin Color and Social Practice: The Problem of Race and Class in the Atlantic South, 1718-1865. He has received the Andrew W. Mellon Fellowship from the Virginia Historical Society and a Bright Lectureship from Yale University. He also writes on teaching and student interaction at the Teaching U.S. History blog. His scholarship has appeared in several journals including The Journal of Transatlantic Studies. He earned his Ph.D. in American History from Louisiana State University.

​Michael Carver lectures in the History Department at California Polytechnic University, San Luis Obispo, and teaches survey classes in U.S. History as well as a class on the Anglo-American Alliance. He earned his Ph.D. in History from Bowling Green State University in 2011, having completed his dissertation detailing U.S.-Turkish relations during the early Cold War era. His many research interests include local history, Military Studies, and the history of popular cinema. He lives in beautiful San Luis Obispo with his wife, a sometime collaborator and fellow ademic, and their cat.

Contributing Author, University of Texas of the Permian Basin, TX

​Micheal Frawley is a Senior Lecturer in History at the University of Texas of the Permian Basin and co-ordinates the university's First Year Experience Program. His area of study is the economic history of the antebellum South focusing on the industrial development of the region. He currently teaches both sections of the U.S. History survey, Western Civilization, Slavery, and Economic History.

Linda M. Clemmons teaches Native American history, early nineteenth century history, and historical methodology at Illinois State University. She has published several articles analyzing the interaction of the Dakotas of Minnesota and Protestant missionaries in the early nineteenth century including Conflicted Mission: Faith, Disputes, and Deception on the Dakota Frontier in 2014. She has also published several articles in Native American encyclopedias. In 2009-2010 she won the College of Arts and Sciences Outstanding Teaching Award, and was nominated for the University Teaching Award in 2011, 2013, and 2015.

​Lance Janda is a Professor of History and Chair of the Department of Social Sciences at Cameron University. He earned his PhD in History from the University of Oklahoma in 1998, and is the author of Stronger Than Custom: West Point and the Admission of Women, along with a wide array of digital and traditional print scholarship. He currently teaches courses focusing on the American Military, 20th Century America, and surveys of United States and Western European history. He is the recipient of numerous teaching awards, including induction into the Cameron Alumni Faculty Hall of Fame

Sam Nelson has taught for 23 years at Ridgewater College, a two-year community and technical college in Willmar, Minnesota. He teaches American History, World History, Western Civilization, Minnesota History, American Government, and Global Studies courses. Nelson has received twelve Golden Apple awards from students for teaching excellence and has been nominated three times for a Minnesota State Colleges and Universities outstanding educator award. Nelson was chosen as a U.S. Fulbright Scholar and taught in Kazan, Russia (2012-13). He has also taught at Oxford University, England and studied at the University of Trondheim, Norway.

​Volker Janssen is Professor of History at California State University Fullerton where he teaches Social and Economic History. His research on California’s prison policies and their relationship to the state’s political economy is forthcoming in Convict Labor, Civic Welfare: Prisons and Rehabilitation in Mid-Twentieth Century America with Oxford University Press. His essays on California’s prison history have also appeared in Osiris and the Journal of American History. Janssen is the editor of Where Minds and Matters Meet: Technology in California and the West (Berkeley: UC Press, 2012) which explores the relationship between technological paradigms and place in the American West and the Golden State, and, "A Tale of Two Crises: A Comparative View of the Political Economic of the Great Depression and Great Recession", which has appeared in Sheila D. Collins and Gertrude Schaffner Goldberg (eds.), When Government Helped: Learning from the Successes and Failures of the New Deal.