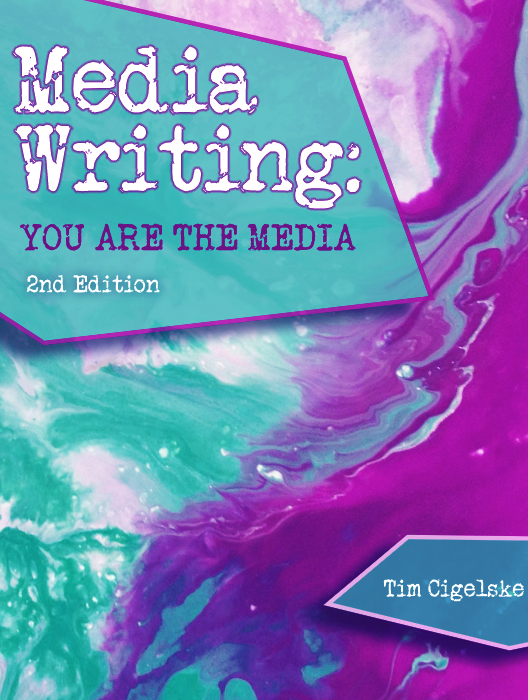 Media Writing: You Are the Media, 2nd Edition

What is the media

Words are, of course, the most powerful drug used by mankind. — Rudyard Kipling

I sat down to write this introduction one week before my 10-year college class reunion.

A lot changed in that decade. A lot has stayed the same.

In some ways, I haven’t strayed too far away. I’m back at my alma mater, Marquette University, working in the Office of Marketing and Communication and teaching media writing and social media analytics.

But my job today — director of integrated content — didn’t exist when I graduated with a journalism degree. Back then, I wrote for the Associated Press and dreamed that one day I might write for Rolling Stone.

My path started to change when I moved to Montana after graduation and took a seasonal job as a bell boy in a national park. I started a blog — when newspaper articles still noted that it was a contraction of “web log” —and wrote about my backcountry adventures.

As a blogger, I no longer needed an editor or an organization to publish my work. With that freedom, I fell in love with writing all over again.

I continued to blog when I secured my first full-time job in journalism. The blog, called Train with Tim, chronicled my experiencing training a runner for her first marathon. Some of this reporting found its way into the paper, but most was online only.

I continued to blog for the paper — until the day our department was cut and I was laid off. I briefly continued this blog on Wordpress and for a crosstown rival magazine.

The seed of that idea still exists as another blog called The Beer Runner, which you can find on the website of DRAFT Magazine. I contracted to write a certain number of blogs a month, and occasionally my freelance work also appears in their print publication.

I continued to make on-air appearances to talk about my blog or offer social media commentary. This happened when a local talk radio anchor direct messaged me on Twitter and asked if I could discuss trust in social media in the wake of the breaking news. (My answer: There has always been misinformation circulating in the media in the chaotic aftermath of tragedy. Now there’s just more of it and it moves faster, but it can also get debunked faster.)

Meanwhile, at Marquette University my daily job now consists of creating and curating content for social media. Part of this includes a new Medium collection of journalistic reporting about academic research, on topics such as autism and signaling theory. I edit the collection and work with two student writers.

I’m not listing all these credentials just to toot my own horn. I’m trying to show how much has changed but also stayed the same in my career.

I'm not the only one asking this question. The definition of media has undergone tremendous change, leading many to question what truly defines a journalist.

The American Press Institute survey found that a "significant numbers of journalism and communication graduates now practice what they consider journalism, even though they don’t work for traditional news organizations."

Even non-journalism students can consider what they do "journalism," according to the Press Institute findings. Nearly a quarter (23%) of those with communication degrees describe the work they do as journalism, as do more than 10% of those with degrees in advertising or public relations.

So who's right and what constitutes journalism and media writing?

In truth, we're still figuring that out. We’ve reached a place where technology moves faster than our definitions. That isn’t just a philosophical question for think pieces. It also impacts this syllabus.

How should we define the media? Is it who signs your paychecks? Or is it the skills you use regardless of who you work for? Does intent or audience matter? Or do you just recognize it when you see it?

I wrestled with these questions as I put my syllabus together. I don’t have all the answers yet, but I come to at least one conclusion: We all have the power of the media now.

We all have the power of the media.

In the past, few privileged gatekeepers – such as editors, news directors and media owners – disseminated information, opinions and entertainment. But today everyone has the ability to publish communication, make it available to the public, reach an audience and potentially leave an impact.

That means maybe everyone should study the techniques, ethics and responsibilities of being the media.

About the author: Tim Cigelske is an adjunct professor and director of integrated content for Marquette University. He earned his undergraduate degree in journalism and master's degree in communication with a specialization in digital communication strategies, both from Marquette University. He teaches and has written textbooks for social media analytics, media writing and an honors seminar on creativity. He has written for publications including Runner’s World, Adventure Cyclist, DRAFT Magazine and Budget Travel. Tim has appeared on ABC’s 20/20 and has been written about in the New York Times, Buzzfeed and the Washington Post. He is a dad of two (9-year-old girl and 5-year-old boy) as well as two rescue beagles.

About the editor: Avery Holton is an Associate Professor and the University Student Media Advisor at the University of Utah where he also serves as the Journalism Sequence Coordinator in the Department of Communication and is a Vice Presidential Scholar. He also was selected as a 2018 National Humanities Center Summer Fellow and served in 2019 as an Oslo Metropolitan’s Digital Journalism Research Fellow. His research and teaching engage social and digital media and their influence on human interaction, identity and the news. Avery previously received his PhD from the University of Texas at Austin in 2013 as a William Powers Fellow and also earned a doctoral certification in Disabilities Studies.