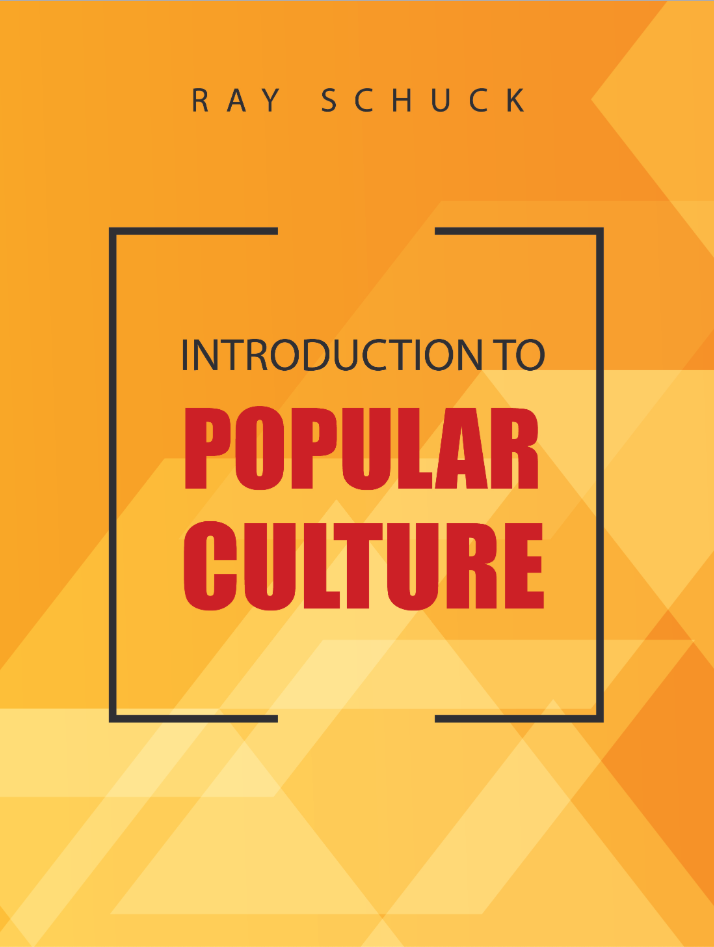 Chapter 1: What Is Popular Culture?

We can begin to answer the question “What is popular culture?” by defining the word “culture.” Building out of the work of cultural theorist Raymond Williams, we can define culture as "a particular way of life" (90). A “way of life” includes a lot of things, including traditions, values and beliefs, behaviors, everyday activities, rituals, norms and rules, objects, and much more. The group of people can occur within a lot of different capacities. Often, people associate culture most prominently with national groups or racial/ethnic groups. So, for instance, people will refer to American culture, Japanese culture, Irish culture, African-American culture, Native American cultures, and so on. Yet, the term can apply to all kinds of groups based on all kinds of identities. We can, for instance, discuss cultures based on gender and sexuality, including male culture, female culture, gay culture, and so on. We can also discuss cultures based on age. For example, we might study children's culture, teenage culture, or senior culture. Similarly, we could look by generation at Baby Boomer culture, Generation X culture, and Millennial culture. We can also apply the concept to additional forms of identities, including deaf culture, working-class culture, Muslim culture, etc. People who study organizations have suggested that organizations have cultures. So, we can look at Starbucks culture, McDonald's culture, and Microsoft culture, among other companies and organizations. Along similar lines, we can look at culture by profession to examine the culture of doctors, the culture of waste management workers, the culture of police officers, and so on. Additionally, the concept can be applied based on tastes and interests, meaning we could examine and take part in cultures such as hip-hop culture, Star Wars culture, and hockey culture.

To understand, then,  what “popular culture” means, it’s useful to go back to the mid-1800s, when British literary scholar Matthew Arnold took up the study of “culture.” In his 1869 book Culture and Anarchy, Arnold defined culture as "the best that has been thought and said in the world" (6). Arnold argued that culture as he defined it was in danger of succumbing to anarchy as working-class men gained political rights and opportunities, because working-class men would advance their own practices, which Arnold judged as not meeting the caliber of the upper-class practices he considered culture. From this perspective, scholars would study what is now called popular culture so that they could combat its influence in society and keep society from the anarchy Arnold prophesied. This is generally considered the beginning of the study of popular culture, though popular culture researchers today have a decidedly different attitude toward the subject matter. While critical of many elements of popular culture, contemporary popular culture researchers see positive value in it as well, and they recognize Arnold's perspective as an elitist one.

Matthew Arnold’s definition of culture corresponds with more contemporary definitions of what is called “high culture.” High culture consists of the texts and practices considered elite or of the highest class. Such activities as opera, classical music, ballet, works of art that hang in art museums, and so on are categorized as high culture. So, too, are the pieces of literature called the greats or the classics, such as the works of William Shakespeare, Charles Dickens, and Aristotle. These works are often referred to as "the canon" of great literature, and historically educators, along the same lines as Matthew Arnold's view of culture, have assumed that these are the works with which any well-educated and "cultured" individual should be familiar. High culture is set in opposition to low culture, and low culture is generally thought to be the equivalent of popular culture. Popular culture consists, then, of the cultural texts and practices of the working classes as well as texts and practices produced and consumed on a mass scale, such as rock music, Hollywood films, graffiti, and works by the likes of Stephen King and J.K. Rowling. In this way, popular culture corresponds to a large degree with mass culture, which consists of the mass-produced, mass-marketed products so many of us use.

At the opposite end of one spectrum from mass culture is folk culture. While mass culture is mass produced and mass marketed on a large societal scale, folk culture is typically individually crafted, and it is produced and distributed or sold on a local level. Think of such forms of expression as folk art, folk crafts, folk music, and folklore. These are often types of folk culture. They typically emanate from small, often regional or local groups of people and are characterized as representing only those small groups.

"The canon" of literature is most associated with which of the following?

This concept is significant because it recognizes that a subculture has a culture that is at least somewhat distinct from the larger culture as well as from other subcultures within that culture. Yet, because the subculture exists within a broader culture, it is influenced by and may have some of the characteristics of the broader culture. So, for example, East Coast culture within the United States differs from "Southern" (which is really Southeastern) culture within the United States. Each of these cultures have distinct ways of talking, word usage, everyday ways of doing things, and so on. Yet, both partake of the larger U.S. culture, including some of the broader ideas about national identity, the American Dream, and so on.

A related important concept is counterculture. A counterculture is a culture that defines itself against some other culture. Often, the word "counterculture" is most associated with the 1960s. That culture involved use of recreational drugs; affinity for psychedelia; interest in particular music styles such as folk rock and psychedelic rock; experimentation with sexuality and sexual norms; and association with protests against racism, sexism, and the Vietnam War. That was a counterculture, defining itself against some dominant elements of U.S. culture at the time. Still, it's just one example of a counterculture. Punk, rap/hip-hop, grunge, and numerous other forms of music have centered around countercultures, defining themselves against mainstream "pop" music. The feminist movement might also be characterized as a counterculture, as it has defined itself as fighting against gender and sexual inequality built into contemporary cultures. Many other types of countercultures exist as well.

One more related important concept is co-culture. A co-culture can be considered a type of subculture in that it's one of a number of cultures that exist alongside one another within a broader culture. Additionally, at least at times, co-cultures can act as countercultures. A co-culture is a culture that exists alongside the mainstream/dominant culture within a society and thus must interact and negotiate with the dominant culture. So, for example, white culture is the dominant racial culture in the United States, meaning that it experiences the greatest cultural privilege and the most access to power and resources in society. Latino/a culture, for example, exists as a co-culture (or, more accurately as a group of co-cultures, since various Latino/a groups differ from one another) alongside white culture. Latino/a culture has many of its own cultural texts and practices that differ from those of the dominant white culture. Yet, Latino/a folks cannot simply express and enact their culture as they wish. Because of the power structure in society, at least at times they must negotiate that with white culture, sometimes conforming to white cultural texts and practices to escape being punished or stigmatized in some way. Thus, in the United States, Latino/a culture is a co-culture.

A co-culture is thus defined by relations and structure of power within a society. Co-cultures are not simply subcultures or cultures that exist alongside other cultures or a mainstream/dominant culture. They are cultures of groups who have less power than the most empowered group(s) and who must then work within those power differences. Chapter 8, which will examine race and ethnicity, will discuss a concept called double consciousness, which relates to the experiences of co-cultural groups. Keep this concept in mind for that chapter.

Cultural capital often becomes a way that people within any culture distinguish themselves from people from outside the culture, and it typically also involves judgments of value, worth, or character. Still, while all cultures have cultural capital, when some cultures become valued over others, such as when upper class “high culture” texts and practices are characterized as if all cultures should find value in them, this reinforces the power of the more valued culture, and it provides advantages and privileges to people from those cultures. People who are not from those cultures have not been exposed or socialized to those cultures’ ways of doing things, and thus they cannot meet those cultures’ standards, even though they are judged by the more valued cultures’ standards. People thus become excluded and marginalized outside of their own control and, often, without even knowing that it is happening.

Cultural ___ is the ability to recognize and follow the cultural codes used in a text or practice.