When the Wall Street Journal teamed up with Times Higher Education last year to produce a ranking of all US colleges and universities for 2017, they allocated 20 per cent of every institution’s score to a metric entitled “engagement.”

Stanford, MIT and Columbia ranked first, second and third, respectively, in total score. But none of those colleges posted top-10 scores for student engagement. Instead, the top five colleges by that metric were all faith-grounded.

Each school’s engagement score was based on responses to the Times Higher Education US Student Survey, which asked students (among other things) about the extent to which their school challenged them, encouraged critical thinking, provided opportunities to interact with faculty and supported them in applying their learning to the real world.

The winner of the ranking was Sioux Center’s Dordt College, affiliated to the Christian Reformed Church. Known for its programs in education, engineering, agriculture and business, Dordt’s engagement score tallied 18.3 out of 20.

The Top 5 colleges for engagement

Phil Baty, THE’s World University Rankings editor, said that the outcome was surprising yet clear. “It seems that these schools tend to have a strong sense of community, with tight-knit groups forming often intimate bonds, engendering the sort of trust and openness that students value.”

Clearly these schools are doing something right, and their success reaches beyond faith. God alone will not keep students from disengaging with their studies. The attributes that Baty describes—community, intimacy, trust and openness—are qualities that every institution, religious or secular, tries to foster.

Tim Van Soelen, a professor of education at Dordt and director of its Center for the Advancement of Christian Education, says his college owes much of its success in engagement to student interactions with faculty.

“I have a small group of students to whom I serve as advisor,” he explains. “We meet to talk about which courses they should take, but we also talk about the nature of their vocation and the path they will walk in life. It’s one of the opportunities we create to walk alongside them.”

Van Soelen readily admits that high engagement scores don’t eliminate the problem of student distraction. “That issue is a preoccupation here just as it is everywhere else,” he says.

But he believes that a strong sense of mission is a definite advantage for Dordt and other faith-grounded colleges in terms of engagement. “When an institution is clear about its mission, if it can clearly answer the question of why it exists, then the questions about what to teach and how to teach it become more meaningful for faculty and for students.”

The takeaway for secular institutions: Avoid mission drift, whether as a university, a department, or an individual instructor. Make a strong, succinct mission statement about technological advancement, knowledge creation, critical thinking or real-world skills development. That way, student engagement becomes the focus in theory and in practice. 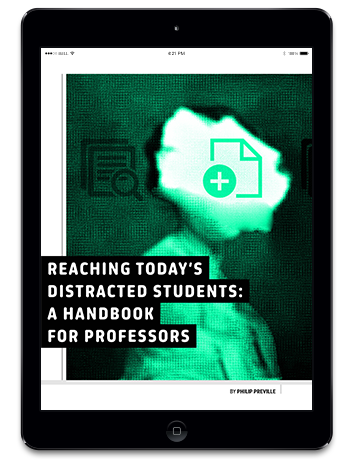 Learn how to exploit the digital devices of students to improve engagement and keep your class focused.

Philip Preville is an award-winning journalist and a former Canadian Journalism Fellow at Massey College at the University of Toronto. He’s currently a member of the Professional Advisory Council with the Department of English at Ryerson University.